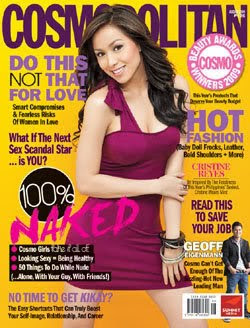 Cristine Reyes inked a 1 year contract with ABS-CBN last week. Prior to her renewal with the kapamilya network, Cristine announced that she plans to return to GMA. It was during the time when she had a conflict with her Banana Split co-stars.

ABS-CBN offered her a weekly drama anthology called “The Cristine Reyes Drama Special”, a primetime soap with working title “Bedspacer” and a starring role in a month-long episode of Your Song Presents.

Aside from winning FHM’s Sexiest Women Poll this year, Cristine Reyes is nominated for Best Actress in the 2009 Seoul International Drama Awards. Her ABS-CBN drama series “Eva Fonda” was also nominated for a special prize in the prestigious award-giving body.