Eat, Bulaga! is now 30 years old and it marked its three decades by giving back to the public through its EB Scholars project that now helps send to school poor, but deserving students and the EB Heroes search that honored contributions to society by the so-called little people.

When the noontime show reached its 25th year, however, the program put up a grand production that has yet to be matched in terms of magnitude and quality five years later on local television.

Billed as Eat Bulaga Silver Special, I failed to catch its airing toward the last week of November 2004 because the first of its two parts was aired on a Saturday, which is preparation time for Startalk.

The good news is that the special had already been compiled into a DVD (it wasn’t that easy to put together) and those who missed it may watch it soon. I had the pleasure of finally sitting down to view it and it is very impressive. Here is my review of the Eat Bulaga Silver Special.

It was the greatest show on earth — at least, on this side of the world. 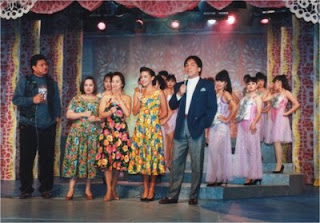 Held at the expansive Clark Centennial Expo in Angeles City, Pampanga province on Nov. 18, 2004, the Eat Bulaga Silver Special was the result of a whole year’s planning and conceptualization, three months of preparation and several weeks of rehearsals involving the biggest cast (by the thousands) ever assembled on Philippine television.

The show’s opening segment alone could rival some of the best production numbers of the annual Academy Awards in Hollywood. It began with 2,000 costumed school children from different public educational institutions singing in unison the Eat, Bulaga! theme song — segueing to Tito, Vic & Joey aboard a mock space capsule that brought them on a time travel back to 1979 — the year the show was launched.

Then came a flashback of the various events that coincided with the birth of the program: From global news like Margaret Thatcher’s installation as Britain’s first woman Prime Minister and Saddam Hussein getting elected as Iraqi president, sports triumphs like Bong Coo’s being a bowling world champion, trends in music (John Travolta and Donna Summer’s disco hits) to trivialities — Melanie Marquez getting crowned Miss International.

After that rundown of recent history, the space capsule flew across the audience area, landed on stage and out popped Tito, Vic & Joey who were visibly overwhelmed by the size of the crowd (estimated at more than 60,000) who showed up at the Clark Expo that day to celebrate with them Eat, Bulaga!’s 25th year on television.

The succeeding segments proved to be an emotional walk down memory lane as the show paid tribute to the men and women who lent face to this noontime treat through those 25 years: From Tito, Vic & Joey to all the former co-hosts who contributed their time and talent to the program and even those were not necessarily regular emcees then, but helped out pinch-hit for other Eat, Bulaga! family members, among them, Helen Gamboa and Lani Mercado. 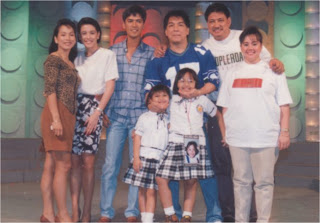 Most touching was the in memoriam portion in honor of two ladies who had moved on to a more fun place than the stage of Eat, Bulaga!: Rio Diaz, an official Eat, Bulaga! host for half a decade, and Helen Vela, who was the eternal pinch-hitter for a period almost close to 10 years.

Helen’s stint with Eat, Bulaga! began when she cheered on as part of the audience that day good friend Coney Reyes was launched as the new female co-host in May 1982. Also once part of Student Canteen, where she quit her former show under not very pleasant circumstances, she was later given an Eat, Bulaga! satellite program, the Kilometrico Quiz, that she co-hosted with Tito Sotto. But Helen always made herself available to take over hosting chores from any Eat, Bulaga! member who was ill, abroad or tied up with other showbiz commitments.

With Aiza Seguerra and Pops Fernandez singing The Warrior is a Child, the tribute to Rio and Helen turned out to be more emotional than lachrymal. The concept and execution hit the right formula because the segment, which could have been morbid, blended harmoniously with the rest of the show that overflowed with so much joy and energy comparable to excitement everyone displayed when we welcomed the new millennium.

The other showstoppers were mostly the numbers that traced all the dance hits that became part of the daily contests in Eat, Bulaga! in the past: The Village People’s Macho Man, Lambada, Thriller and other dance crazes that were made popular to the viewing public via this noontime program.

Later in the special, Jopay Paguia and the Sexbomb Dancers whipped up a storm of a performance when they were joined — via VTR — by the now-New York-based Gracia in a terpsichorean showdown that went back to the days when the dance hit was Manila Girl and went all the way to the then still sizzling hot Spaghetti.

An interesting trivia was the Arnold Clavio segment (with puppet Arn-Arn), wherein the award-winning broadcaster revealed that in 1983, he joined along with his gang an Eat, Bulaga! competition where he was a drummer in their Beatles-inspired entry. They lost in that one. Undeterred by their defeat, Arnold returned to audition for the Footloose dance contest, but was booted out as early as the audition round.

The special actually tried to feature everyone who had been part of the program up to that time either via clips or numbers and in the process we were reminded of the celebrities who once graced the show — from major local celebrities like Sharon Cuneta and Maricel Soriano to big foreign artists the likes of John Denver, Brian McKnight, Michael Bublé and the Menudo.

And then there was a throwback to the different periods when Eat, Bulaga! became the launching pad for some of today’s young talents who joined the show’s various contests — from Little Miss Philippines to Mr. Pogi that gave us Jericho Rosales.

The biggest tribute, however, was given to the King of Comedy, Dolphy, who joined Tito, Vic & Joey in a medley of foreign classics that led to the comic geniuses doing on-air banter.

At the finale, the special ended literally with a bang as a series of fireworks enveloped the skies above the venue site. It was one moment that could choke with tears and emotions even those watching at home — as cast, crew and those in the live audience celebrated that important occasion that marked this favorite noontime fare’s turning silver.

Eat Bulaga Silver Special was voted Best Entertainment Special at the 10th Asian TV Awards the year after it was shown on television.