Another intense and tear jerking episode of “The X Factor” aired recently when 14 year-old Drew was sent home by all three judges except by his mentor Simon Cowell. Simon was furious over Nicole Scherzinger, Paula Abdul, and L.A. Reid’s decision and quickly went on stage to comfort the first eliminated act in his group.

When host Steve Jones asked him some words to his fellow judges, Simon refused to speak and gave a very disappointed look. With Drew sent home, Marcus Canty joins the top five acts of the show. 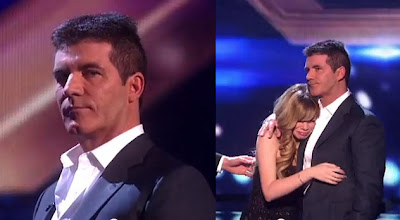 Fifteen year-old rapper Astro, who created a spur online with his cocky attitude, also got booted off last week after receiving the lowest number of votes. The competition heats up this Thursday (Dec 8) as acts Melanie Amaro, Rachel Crow, Marcus Canty, Chris Rene, and Josh Krajcik sing two songs each to impress America.

Who will be eliminated next? Don’t miss “The X Factor” airing via satellite every Thursday and Friday, 7 PM, on Studio 23.