The smash hit pan-Asian musical-cooking TV series “The Kitchen Musical,” which aired on Philippine free TV via Studio 23, has been nominated for two categories at the prestigious 2012 New York Festivals under the International Television & Film Awards competition for “Best Writing” and “Best Performance.” 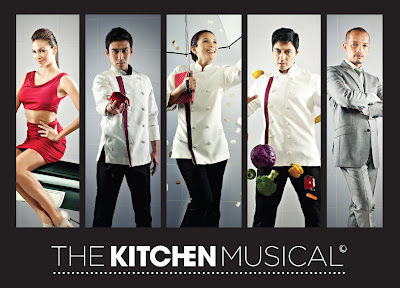 On its 55th year, the New York Festivals is World’s Best Television & Films honors the “World’s Best Work™” in news, sports, documentary, information and entertainment programs which mirror today’s global trends and encourage the next generation of story-tellers. The Kitchen Musical was chosen amongst entries from 40 countries worldwide.

This year’s ceremony will be held on April 17th in conjunction with The National Association of Broadcasters show in Las Vegas.

“It is such an honor for a small company like ours to be recognized by a long-standing established body such as the New York Festival. These acknowledgments from a jury of award-winning industry professionals from around the world who are recognized as leaders in their respective fields, will propel us to continue to follow our instincts, buck the trend, and produce creations that increase the happiness quotients globally,” said CheeK, creator of “The Kitchen Musical” and Head of Creative for TGE.

An original production by The Group Entertainment, The Kitchen Musical is a genre-busting TV series featuring drama, music and food served in 13 one-hour episodes. It is a story about a rich, young girl fresh out of culinary school who embarks on a journey of self-discovery when she starts working for The Avilon, her father’s restaurant. It aired in 17 countries across Asia in October 2011. Local versions of the series are currently in the works for Italy, India and Vietnam.

After the success of the show’s season one launch, it goes for asecond run starting May 2012 across multiple platforms including more broadcasts on “Free-to-Air” stations across Asia.

Starting March 5th this year, The Kitchen Musical Season One soundtrack album is made available via Universal Music in Singapore, Hong Kong, Malaysia and Indonesia, and will be launched by Universal Records in the Philippines this April, followed by Korea, Taiwan and Thailand.

Watch out as it returns soon on your Kabarkada Network, Studio 23. For more information, visit its official Facebook page at www.thekitchenmusical.com/facebook/ph.