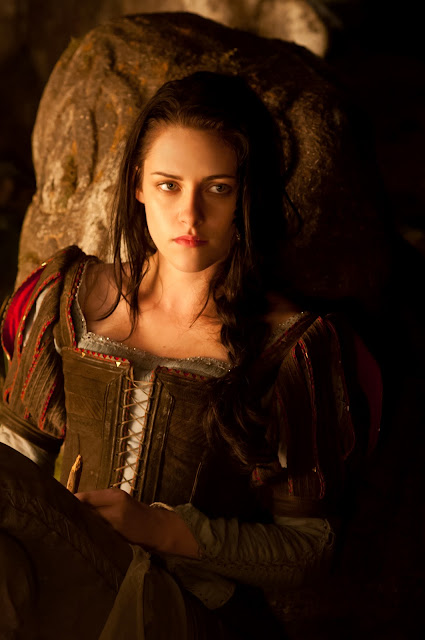 In Snow White and the Huntsman, a breathtaking new vision of the legendary tale begins. Kristen Stewart plays the only person in the land fairer than the evil Queen Ravenna (Charlize Theron).

The casting of Ravenna’s nemesis was slightly trickier than finding her pursuer. The filmmakers were searching for an actress who could capture both sides of the archetypal character: the innocence, naiveté and tenderness that Snow White demonstrates in the first half of our story, and the tough, physical warrior princess that she becomes in the second half. They discovered a number of younger actresses who could play the first half of the movie brilliantly but had trouble convincing the team that they could carry off the tougher persona.

Likewise, when older actresses auditioned, they could well portray the battle-hardened soldier but were unconvincing as the recessive captive that the film’s early scenes demanded.

After a worldwide search for a performer who could fulfill the demands of this expansive role, Kristen Stewart, known for her role as Bella Swan in the blockbuster Twilight saga, was cast in the much coveted role of Snow White.

Comments director Rupert Sanders of the team’s choice: “Kristen is such an incredible talent. She has obviously done amazing work in her projects to date, but this opens her up to an even larger audience and gives her a classical role. She’s previously been in films that are of our era and not done a film quite like this. This is her chance to rise, and to shine as well. The two track well together.”

Producer Joe Roth gives a bit of background on her casting: “We all felt convinced that Snow White was not shy but somebody who was an aggressive, assertive, positive Joan of Arc-like figure. We originally were looking for an unknown to play the character, in the same way we did on Alice in Wonderland, where we found Mia Wasikowska. However, Rupert and I decided to fly down to New Orleans, where the last Twilight film was being shot, and sat and talked to Kristen. We felt great about casting Kristen. She really did her homework for this role. She spent four months riding horses and four months with an English accent.”

Stewart introduces us to a young woman we thought we had long known: “We’re not trying to take Snow White and turn her on her side; we stay very true to who she is in the story. She represents a reminder of just how great people can be to one another.”

Agreeing with Theron, the actress appreciated the material’s thoughtful take on beauty and power. Stewart says: “It’s been interesting to play a young girl who is completely unaware of any vanity. She just has none. In almost every other role you play, you’re at least aware of yourself and might have to play a girl dealing with vanity as she grows into a woman. The fact that Snow White has absolutely none of that, and Ravenna has the ultimate opposite, says something very nice about what people find beautiful in life.”

The performer appreciated the writers’ take on Snow White, a character initially trapped in a forest that draws its strength from any weakness. Stewart reflects: “I do admire strong characters, but this wasn’t strong for the sake of strong. It was so feminine and so human, and I love playing a character who is someone that you’re going to root for and throw your drink on the ground and stand up and go, ‘Yeah!’”

This part represented Stewart’s first time as an action heroine, albeit a conflicted one. She says: “Snow White is initially this disconnected martyr. After she escapes, she’s becoming this human being again, but she’s not necessarily fighting for herself. It’s like there’s a hole that can’t be filled. Most action characters are so self-righteous and vindictive, but she won’t do that. I’ve never seen that before, and I think it’s awesome.”

Stewart knew there would be much stunt work involved in a production of this size and scope, and she was more than ready for the challenge. For example, during Snow White’s escape scene, the actress was required to be literally up to her shoulders in an enclosed sewer set with dozens of live rats. As well, she had to jump off of a two-story building into a pool on a chilly London day to make this daring escape.

“Snow White and the Huntsman” is released and distributed by United International Pictures through Solar Entertainment Corp. Showing on June 1, 2012 nationwide.