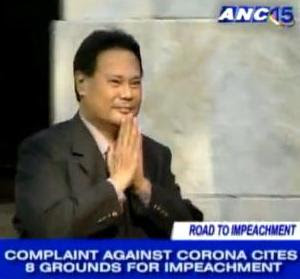 Chief Justice Renato Corona left millions of Filipinos dumbfounded when he asked to be excused and left the Senate plenary hall after a three-hour lengthy speech at his own impeachment trial last May 22. In the midst of this chaos, ABS-CBN news reporter Ryan Chua was there to witness what had gone on behind the cameras that followed the hearing. Watch unaired behind-the-scenes footage and reactions of the prosecution and defense panels, the senator-judges, and select spectators tomorrow (May 29) in the news documentary program “Patrol ng Pilipino.”

Join Ryan as he uncovers the details behind Corona’s testimony and its implications based on the analysis of legal experts.

Meanwhile, Apples Jalandoni will probe on the reported smuggling of coconut, palm, and soya oil in the country, which according to the Federation of Philippine Industries, greatly harms the local coconut industry. What could be its effect on Filipino coconut growers and farmers?

Know the stories behind the news tomorrow (May 29) in “Patrol ng Pilipino” after “Bandila” on ABS-CBN or watch it earlier on DZMM TeleRadyo (SkyCable Channel 26), 9:15 p.m.