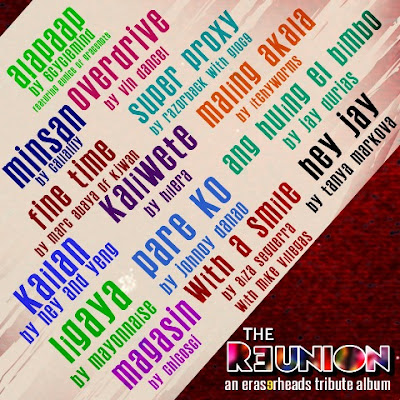 A week after its release, “The Reunion: An Eraserheads Tribute Album” ranked no. 4 in the overall (combined foreign and OPM categories) top-selling albums of Astroplus from May 10 to May 16.

The nationwide sales feat, according to album co-producer Darwin Hernandez, is a result of almost four months of solid teamwork among Star Records, the staff and crew, and the featured singers and bands themselves.

“This is not just an album made out of the blue. It’s an exceptional tribute project made for a phenomenal Filipino band who had contributed so much not only in Philippine music but in our culture, as well,” said Darwin. “It was well-thought of, carefully planned, and everyone who was part of the album gave out their 100% effort to produce a tribute album that The Eraserheads truly deserves.”

Darwin shared that ‘The Reunion‘ is a collector’s item that die-hard supporters and young music fans alike can enjoy listening to. “We made the album with full respect to the music of Ely Buendia, Raimund Marasigan, Buddy Zabala, and Marcus Adoro; and to their priceless contribution to Philippine music history. Even kids of today, who were not yet even born 20 years ago when The Eraserheads was launched, can appreciate the beauty of the masterpieces of the group who revived Pinoy rock in 1990’s.”

“The Reunion: An Eraserheads Tribute Album” features 14 anthemic The Eraserheads hit songs creatively interpreted by some of today’s hottest bands and solo acts. The album’s carrier single is ‘Minsan’ sung by Callalily.

Completing the tracklist are ‘Alapaap’ by 6CycleMind with Eunice of Gracenote, ‘Minsan’ by Callalily, ‘Overdrive’ by Vin Dancel, ‘Fine Time’ by Marc Abaya of Kjwan, ‘Superproxy’ of Razorback with Gloc-9, ‘Kailan’ by Ney and Yeng Constantino, ‘Kaliwete’ by Hilera, ‘Maling Akala’ by Itchyworms, ‘Ligaya’ by Mayonnaise, ‘Pare Ko’ by Johnoy Danao, ‘Ang Huling El Bimbo’ by Jay Durias, ‘Magasin’by Chicosci, ‘With A Smile’ by Aiza Seguerra with Mike Villegas, and ‘Hey Jay’ by Tanya Markova. ‘The Reunion‘ album was produced by Darwin and Rye Sarmiento of BBS.

Meanwhile, in line with the tribute album, Star Records recently launched its “Soundtrip to Roadtrip Promo” wherein fans get the chance to win a Chevrolet Spark just for purchasing ‘The Reunion’ CD at selected SM, Astro, and Odyssey Music and Video stores. The promo runs from May 14 until August 3. For the complete promo details, fans can visit the Star Records fanpage at www.facebook.com/starrecordsphil. Also part of ‘The Reunion‘ promo is the popular clothing line Dickies.

Relive the imortal hits of The Eraserheads in the “The Reunion: An Eraserheads Tribute Album” now available on record bars nationwide. Digital tracks can now be downloaded via www.starrecords.ph, www.mymusicstore.com.ph, and in iTunes through www.amazon.com.