“TIKTIK:The Aswang Chronicles” is the first feature-length Filipino movie entirely shot on green screen. Only the houses and vehicles are real. All the backgrounds, including trees, mountains and creatures were laboriously and painstakingly realized using the latest computer technology. 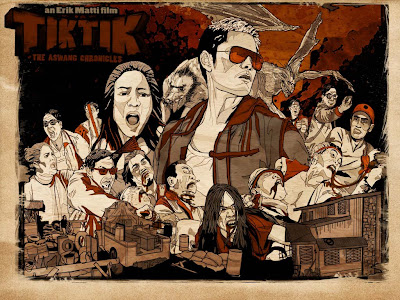 “TIKTIK:The Aswang Chronicles” honors the genre’s traditions without taking itself too seriously as it combines honest-to-goodness scares with irreverent Pinoy wit and humor.

Directed by Erik Matti, it stars Dingdong Dantes, Joey Marquez, Janice de Belen, Lovi Poe, and Ramon Bautista, as an odd mix of characters who suddenly find themselves the target of a vicious, deadly attack by a legion of pissed-off aswangs.

As if their own strained relationships weren’t stressful enough, they now have to fight for their lives with all the heart, guts, and garlic they can muster.

This is the trailer