Menu
Search
Two-time Oscar-winner Emma Thompson provides the voice of Elinor, the Scottish Queen who has her own plan in mind for her daughter Merida—a plan that’s been predestined since long before either of them was born, in Disney/Pixar’s new 3D animated feature, “Brave.” 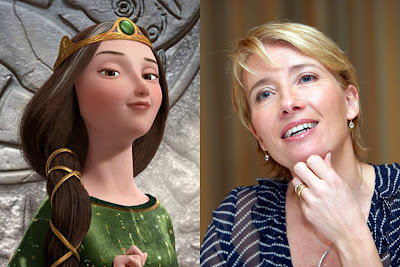 A vision of grace, wisdom and strength of character, Queen Elinor is fiercely dedicated to the well-being of her family and kingdom. As the measured, diplomatic counterpoint to her more impulsive husband, King Fergus, Elinor carries the weight of the kingdom on her shoulders in order to maintain the fragile peace between the volatile clans. Elinor strives to instill in Merida the knowledge and manner of a royal, expecting complete commitment to Elinor’s standards. But her vision of her daughter’s future is at odds with Merida’s rebellious spirit and desire to forge her own path, which ultimately causes Elinor to face calamitous consequences.

“Elinor is beautiful, but under a great deal of pressure,” says production designer Steve Pilcher, “which is tough to showcase visually. We added a shock of white hair that really shows her backstory—this woman has suffered some stress in her life, her daughter’s rebellion is likely just the tip of the iceberg. That unspoken history and bit of imperfection makes Elinor more interesting.”

According to Pilcher, the design team studied paintings of Lady Macbeth, among other tragic heroines, incorporating the heavy robes and thick fabrics they observed to illustrate the weight Elinor bears. Emma Thompson says it’s that attention to detail and intense research that makes Pixar successful. “I was terribly pleased to be asked to come and work for Pixar, because their films are works of genius and extraordinary art,” she says. “And the thing that really made me want to do ‘Brave’ even more than my worship of their work is that it was set in Scotland. I’m half Scottish, and I live there for three or four months of the year. Scotland to me is the land of the free, the land of the brave. The Scottish landscape is epic and lends itself to epic emotion.

“Scotland is really a character in the film,” Thompson continues. “The filmmakers didn’t just look it up in a book. They went off and spent all this time in Scotland looking at different landscapes, addressing the landscape with the story. There’s a real connection with the countryside—they loved it as everyone does because it’s the most beautiful country in the world.”

Thompson also had an affinity for her character. “Queen Elinor is a character I like very much because at one time she was quite feisty—Merida’s spirited personality comes not only from her father but from her mother as well—but Elinor has managed to put that stuff she had when she was young in a box and she’s stitched it up nicely. The two of them have to work out which bits of the other they’re okay with containing and becoming.”

Co-director Mark Andrews says Thompson captured the essence of Elinor. “Emma is royalty in the acting world and she knows exactly what Elinor needed to be. She is queenly and regal and noble, but at the same time, she can be bawdy and funny. She can be very serious and theatrical—then crack a joke. That’s exactly who our queen is. Emma gives Elinor just the right amount of emotion, earthiness and humor.”

Animators often reference video footage of the actors recording their lines and sometimes incorporate subtle gestures, expressions and mannerisms into the characters’ physical performances. Thompson could see a bit of herself in Elinor. “I love the way they’ve captured my eyebrows in my character. My eyebrows are always in this kind of questioning, slightly worried shape, and they got that just right.”

Thompson concludes, “‘Brave’ is full-hearted, exciting, adventurous and very funny in many places, yet emotionally rooted in reality. The calibrations of the story and the way it moves emotionally is pure Pixar; it’s real and beautiful. It has everything I would want in a story, including just enough magic to make trouble.”