The story of Disney/Pixar‘s new animated feature “Brave” was very personal for the film’s directors, Mark Andrews and Brenda Chapman. They drew from the experiences of their own families, combining that with their Scottish heritage and love of the country. With their strong backgrounds in storytelling and filmmaking, they were able to weave a tale that was original, emotionally stirring and full of thrilling adventure. 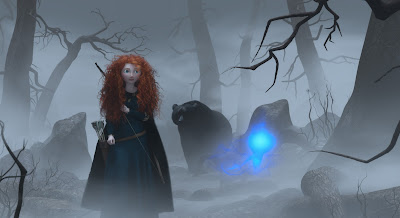 “Brave” follows the heroic journey of Merida, a skilled archer and headstrong daughter of King Fergus (voice of Billy Connolly) and Queen Elinor (voice of Emma Thompson). Determined to carve her own path in life, Merida defies an age-old custom sacred to the unruly and uproarious lords of the land: massive Lord MacGuffin (voice of Kevin McKidd), surly Lord Macintosh (voice of Craig Ferguson) and cantankerous Lord Dingwall (voice of Robbie Coltrane). Merida’s actions inadvertently unleash chaos and fury in the kingdom, and when she turns to an eccentric Witch (voice of Julie Walters) for help, she is granted an ill-fated wish. The ensuing peril forces Merida to harness all of her skills and resources—including her clever and mischievous triplet brothers—to undo a beastly curse before it’s too late, and discover the meaning of true bravery.

There’s a reason why the story of “Brave” is so relevant, says Chapman: it’s inspired by a real relationship. “I was dealing with a very headstrong daughter,” she shares. “She was so passionate and so strong—and she was four at the time. I thought, ‘What’s she going to be like as a teenager?’

“I started to imagine what a fairy tale would be like,” continues Chapman, “with a working mom and a really willful daughter whose strength you don’t want to squash—but sometimes you do want to squash it a little. But in the end, it wasn’t a fairy tale at all. ‘Brave’ turned out to be more of an epic action-adventure.”

Chapman knew instantly where she’d set this new action-adventure fantasy tale. “I have a love of Scotland,” she says. “It’s my ancestry, though I’m one of the great American mutts and my family has been around since before the Revolution, so I can’t find that old country family connection. Scotland’s just such an amazing place. It’s beautiful. The people are really hearty and they have an incredible spirit.”

In creating the story for “Brave,” the filmmakers took elements of Scottish history and lore to construct their own legends. A demon bear named Mor’du, the gathering and unity of the clans, the role of the mystical will o’ the wisps and a mysterious witch with the power to create change are all rooted in reality and mythology.

“When we visited Scotland on our research trip, we met amazing storytellers and historians who had a big influence on us,” says Larsen. “Scotland is a storytelling culture—wherever we went, the locals erupted into stories of their everyday lives and the people they knew. The story of Mor’du was inspired by the stories we heard while we were there.”

Filmmakers infused the folklore and magic they soaked up in Scotland throughout the story. According to production designer Steve Pilcher, even a hint of magic enhanced the mystical tone of the film. “We evoke the feeling of magic without using magic,” he says. “Adding lichen to the standing stones or dew drops on the grass—it catches the light and emits a little sparkle. We created the fantasy with a natural element, which is great for this story in this place.”

Adds director Mark Andrews, “The will o’ the wisps are in a lot of Scottish folklore. They were said to lead you to treasure or doom—to change your fate—but they’re an actual phenomenon of swamp and bog gas seeping up through the earth and interacting with the natural resources to create the blue flames. People would follow these lights thinking they were little fairies, and basically drown or get sucked down into the bogs. [So] we made the wisps like actual little spirits.”

Once Pilcher had that directive, the design of the wisps came together. “We liked sapphire blue against the natural environment because there’s nothing like it in the rest of the film. That shade of blue is the hottest part of a flame, yet it feels cold. That contradiction is intriguing and that’s what magic is about. There is a desire to touch it, to follow it, but also a little fear.”

“They’re almost like Marley’s ghost in a way,” says Andrews, “because Marley’s ghost isn’t an evil spirit—even though he’s frightening, he’s trying to warn Ebenezer to change his ways. That’s what the wisps are doing. There’s a duality to them, because they’re either good or evil—they lead Merida into more and more trouble, but in the end, they’ve led her exactly where she needs to go.”