Not one but four GMA Network rising stars grace the cover of the July 2012 issue of MEGA Magazine, which is now available in stores nationwide. 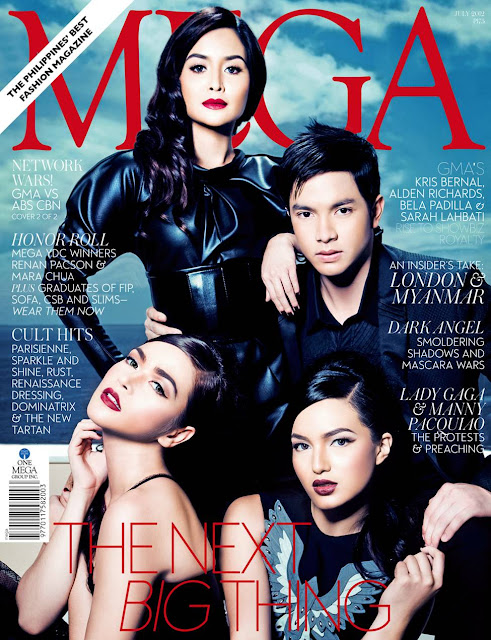 Dramatic actresses Kris Bernal, Sarah Lahbati and Bela Padilla, and new primetime leading man Alden Richards join the ranks of select celebrities who were given the chance to appear on the glossy magazine’s cover.

In the said issue, Kris, Sarah, Bela and Alden tell their discovery stories: how they made their way into show business and how they have kept a constant and huge following.

Kris Bernal : Like many Kapuso stars, Kris Bernal was a product of the talent search StarStruck. She joined the search in 2006 and since then, she has come a long way in her showbiz career. Among her previous roles, the one she portrayed in the “danceserye” Time of My Life was her most memorable. In her interview with MEGA magazine, she reasoned, “Doon ko nararamdaman na sobra akong na-challenge sa role. Kailangan kong sumayaw at umarte.” Kris has always been known as a young drama actress, but the bubbly side of her wants her to try romantic comedy or “romcom.” Whatever genre she wants to try her hands into, Kris Bernal will surely be able to carry it out.

Sarah Lahbati : Sarah Lahbati has the looks of an angel: soft, lovely and naturally blooming. This and her natural acting talent caught the attention of the public when the teenager joined StarStruck in 2009. After StarStruck, various projects started to come her way beginning with supporting roles. After playing the lead role in the afternoon series Kokak, Sarah successfully invaded the strictly exclusive domain of primetime TV working alongside equally talented actors Richard Gutierrez and Carla Abellana in the series Makapiling Kang Muli.

Bela Padilla : She may be one of the most hated characters in her TV soaps, but deep inside, Bela Padilla has a heart of gold. Her convincing portrayals of kontrabida roles usually mask her real personality: quiet, conservative and kind-hearted. In her interview with MEGA magazine, Bela said that she wants to always keep “an air of mystery” around her and that while young, she wants to try a lot of things because she’s not going to get this time of her life again. Bela Padilla currently stars as Kris Bernal’s antagonist in the afternoon series Hiram na Puso.

Alden Richards : When Alden Richards first tried to enter show business in 2009 via StarStruck, he failed. A year later, he landed a prominent role in the afternoon series “Alakdana” in 2010, a lead role in the Yam Laranas horror film “The Road” in 2011 and this year another lead role in the primetime TV series “One True Love.” Now, Alden joins the ranks of only a handful of male stars who ever graced MEGA magazine’s cover, the first one being Richard Gomez. Alden says that despite his successes and his current celebrity stature, nothing has changed in the way he lives his life. He is still the same home buddy, simple boy-next-door and lovable dimpled-one.

Find out more about Kris, Bela, Sarah and Alden by grabbing a copy of MEGA Magazine’s July issue available in stores near you.