Menu
Search
Two-time Academy Award® nominee Jeremy Renner a performer as comfortable with drama as he is with action, stars in Universal Pictures “The Bourne Legacy” he plays Aaron Cross is one of six agents in a program called Outcome. 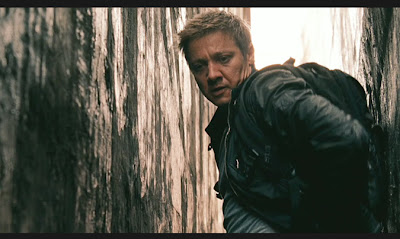 Unlike the CIA’s Treadstone, Outcome agents have been developed and trained for use by the Department of Defense. More than assassins, Outcome agents are designed for use in isolated, high-risk, long-term intelligence assignments. The behavioral science that was suggested as the underpinning of the Treadstone agents has been upgraded and advanced, but it’s the shared origins of these two programs that makes Outcome so vulnerable as Bourne’s story becomes public knowledge.

How did this role come to you?

It came to me in a very BOURNE-like way. Someone flew out to Germany where I was shooting HANSEL AND GRETEL. They knocked on my door, handed me a script and said, ‘When you’re done with it, call this number…’ It was very spy-like. So I read it, loved it, and thought I’d be an idiot not to do it.

Did you have any qualms about doing this role given that you know Matt Damon who played Jason Bourne in the previous films?

The only qualm would have been if I was being asked to play Jason Bourne. So, it was really easy because I’m not. Now that the trailers are out you get the idea of what the film is about.

Who is your character, Aaron Cross?

At his basic, Aaron Cross is a guy that wanted to belong. He’s a guy who wants to fit in and be a part of something. He’s completely the opposite of who Jason Bourne was. Bourne was just trying to find out who the hell he was, but this Aaron Cross knows exactly who he is. He knows what he wants to do and that’s being a part of this team.

You have an amazing motorbike chase scene in Manila with Rachel Weisz clinging on for dear life. How did you prepare?

To prepare, I had to get used to that motorcycle. It’s an on-road, off-road bike which is a different way to ride than the street bikes that I’m used to. It’s the opposite of almost everything I’ve ever ridden. I had to get use to that bike and then having someone on the back riding with me. If it was just me, I would have taken a few more risks but when I’m responsible for the person on the back, it’s a different thing. I just had to demonstrate due diligence and get used to that bike as much as I could.

Did you participate in bike boot camp?

I did it on my own and also worked with Dan Bradley, who set me up with some people to train with. Once we got to Manila, I worked with Dan and our motorcycle guys there just racing around in parking lots.

Did you go to any CIA facilities for your research on THE BOURNE LEGACY?

No, it was much more about physical training. I had to do things that couldn’t be faked, like the fighting, so I had to really work on my fighting skills. You can’t fake those.

You seem like a guy who would know how to fight.

I don’t know about that. I haven’t gotten into a fight since the second grade and I would like to keep it that way.

In THE BOURNE LEGACY your character, Aaron, talks about drugs designed for use in “programmable behavior”. Is this a reference to the use of steroids in sports today, enhancing strength to super-human levels?

No, I don’t think there’s any of that. This is a specific thing that I can’t talk about without spoiling the film. It’s not trying to make a backhanded statement about anything.

Do you think there are people like Aaron Cross out there?

No, I haven’t. That would require a lot of time. I’m a guy who has very limited time right now. It’s such a leisure activity to sit down and read for pleasure. I normally read to be educated. The last time I read for pleasure was probably 15 or 20 years ago.

We see you doing a scene where you’re practically walking up a vertical wall. How many takes did you do?

It was a lot of work. That was a fun, tough scene. We had to do that about 20 times or so. It got exhausting. I think they ended up using the second take.

You filmed THE BOURNE LEGACY in several locations including Canada, South Korea and the Philippines. Which was the most memorable location?

I really had a lot of fun in Alberta, Canada just because it was around Christmastime and it was snowing. You don’t really get that in California. It was really beautiful although I hated putting on the beard.

It’s not your own beard?

No, it’s impossible to do that in the middle of a shoot. You would have to grow the beard and then shoot out of sequence. There‘s no way that’s going to happen.

Were those real wolves in that scene where you’re under attack in the forest?

Yes, those were real wolves.

How freezing cold were you in those scenes in the snowy mountains?

It was very cold. The most memorable thing was being in the water at negative temperatures. That was pretty intense. There’s nothing you can do to prepare for it. You just go in and freeze and hope your heart doesn’t stop.

What comforts do you bring when you’re on location?

I travel pretty light. I just need some food. My basic needs are like those of a caveman.

You’re also a musician. Is music important to you?

I’ll bring a playlist or two, if I need a little help for energy. I play it with my headphones on while I’m preparing in the morning. I’ll spend about an hour in the morning stretching and getting loose so that I don’t get injured.

Starring in THE BOURNE LEGACY, did you feel a little like you’re open to comparisons from the past?

No, not really because this film is all tied together. It just expanding on the original concept and continues the story. This film’s story also runs parallel with the story of THE BOURNE ULTIMATUM, which is happening at the same time. It really opened up the parameters and the perspective on what that universe is.

Are you signed to a sequel?

If the movie does well, I think we’d love to do another one.

Ten years ago, you played the notorious serial killer Jeffrey Dahmer. But your role in THE HURT LOCKER in 2008 changed everything. Now you’re starring in massive action films like MISSION: IMPOSSIBLE – GHOST PROTOCOL, THE AVENGERS and THE BOURNE LEGACY. You must feel pretty good about that.

I feel like the luckiest guy around. It’s nice to be able to work and it’s even nicer when people see your work. When it turns out well and does well at the box office, it’s even better. It’s a wonderful feeling.

Can you talk about your new production company, The Combine?

It’s a great way for me to be creative from a different perspective. Instead of just being the painter, painting the house, now I’m a guy contracting the house. That’s what producing a movie is like, having a little bit more say in the matter. On jobs, I tend to take on more work than necessary anyway. I’m not just an actor who comes in. I consider everything and I really like cinema and movies. The Combine allows me to aggregate some people who I think are really talented and am crazy about. Then they can make movies that the studio won’t make or maybe they make one of those a year. I think there’s a great pipeline for amazing cinema like THE HURT LOCKER or THE TOWN or films that aren’t $150 million massive franchises where you put on some tights and need CGI to be made. I’m willing to put in the legwork for it.

Are these your passion projects?

Yes, but hopefully these projects come with commercial viability. We want them to do well and we want people to see them. We don’t want to make art-house movies.

And you plan to star in and produce a Steve McQueen biopic. Was he an idol to you growing up?

I think he’s an icon. I was never really a crazy rabid fan by any means, but I certainly have seen quite a few of his movies. I just thought he was a really interesting guy and interesting to explore. It’s an honor to explore his journey.

What makes him so iconic?

I think the things we know about him are only just the backdrop to who he is as a person. He’s a walking dichotomy. He’s the most generous and giving and at the same time he’s the most stingy and frugal. He’s constantly the polar opposite of himself. His upbringing was also really interesting. I can’t wait to jump into this project.


Are you still renovating houses?

Yes. I’m doing one now. It’s been a part of my life for a long time and I don’t plan on giving it up. I really, really enjoy doing it. It’s a tangible thing, one of the few things that I do in life that will still exist after the movies are gone. These are homes and lifestyles that I help provide for people.

Is it hard to part with these houses after you’ve put so much love and care into them? Do you get emotionally attached to them?

It’s like having a dog. You’re not a dog-owner; you don’t own the dog. You provide a nice lifestyle for that dog to live as long as it’s supposed to live, but you don’t own it. To me, it’s the same with children. You don’t own your children. You want to give them the tools to succeed in life. Then they grow up and you give them the other tools to make it through life. You’re done parenting at that point, at least in my eyes. It’s the same thing with a house or anything else. You don’t own anything. You’re just lucky enough to share experiences together.

“The Bourne Legacy” is released and distributed by United International Pictures through Solar Entertainment Corp. Showing on August 8, 2012, Nationwide!