Search
With its fierce plot, brave confrontation scenes and its stellar cast, Star Cinema’s latest daring film “The Mistress,” topbilled by John Lloyd Cruz and Bea Alonzo, continues to stir up strong reactions from the public, including the active netizens in popular social networking sites and some of the well-known personalities in the country.

Set to redefine everyone’s meaning of love and loyalty, “The Mistress” will hit theaters nationwide this Wednesday, September 12. 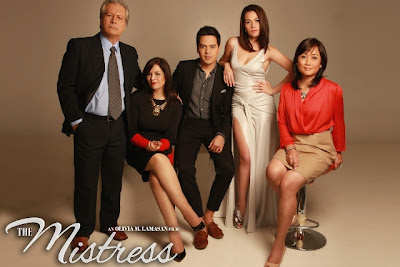 Aldrin Cerrado, Rotary Club Makati East president, admired the life lessons that “The Mistress” will impart to its viewers. “All of us has something we really want to have in life. But no matter how hard we try, some things are just not really meant for us,” he said. “I think the movie teaches us about acceptance and forgiveness na ipinapakita ng apat na characters dito.”

“For me, ‘The Mistress’ is a masterpiece. Every scene and every dialogue is breathtaking,” Gretchen commented. “It happens everywhere, it’s so real. Gustong-gusto ko ‘yung linyang ‘walang babaeng pinangarap maging kabit.”

Aside from Bea and John Lloyd, also part of “The Mistress” are two of Philippine cinema‘s finest actors namely Hilda Koronel and Ronaldo Valdez. Completing the cast are Carmi Martin, Anita Linda, Minnie Aguilar, and Clarence Delgado. “The Mistress” is set to hit theatres nationwide on Wednesday, September 12, 2012. For more updates about “The Mistress,” simply visit www.StarCinema.com.ph, http://facebook.com/StarCinema and http://twitter.com/StarCinema.