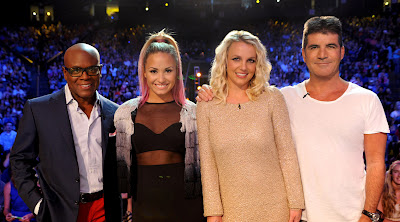 Season one judge-mentors Simon Cowell and L.A. Reid are back and now joined by teen sensation Demi Lovato and pop icon Britney Spears as new judges to search for an out-of-this-world 12 years old or over talent – both solo artists and vocal groups – who are bold enough to face the superstar judges and the Fifth Judge, the audience of thousands, who they have to win over during the audition.

Aside from the singing acts that may wow the crowd with their vocal ability, charisma and stage presence, fans are excited to see how Demi and Britney will get along and react with their co-judges especially with the ever-unapologetic Simon.

“So far everything has been so much fun for all of us. Everything is like a ew experience for me. It’s a lot of fun and the talentsare amazing,” shared Britney.

Simon earlier commended the girls, in an interview with People.com, for doing a great job. He even quipped that Britney, after taping a few episodes, turned out to be quite mean and very difficult to please. Demi, on the other hand, he said was quite annoying. “I thought she was very confident, very bright, then became quite annoying, but knew what she was talking about,” explained Simon.

When it comes to their judging, Britney described her style as “subtle” and that she will try to use constructive criticisms, while Demi simply put it as “happy” and “really honest”

Simon also revealed that more of the mentoring process can also be expected this season. “A lot of what we did was off-camera. I think the mentoring process, how we actually work with the artists, how they interact with each other, where they’re staying, is an important part of this show. I think all that process has to be shown.”

Last season, Melanie Amaro was crowned winner and Simon, who mentored Melanie and the rest of the Girls came out on top. But will one of the other judges dethrone him this year? Who among the contestants are worthy of the $5 million recording contract with Syco/Sony Music?

But before the whole world meets the second “The X Factor USA” winner, Filipinos will first meet the first grand winner of “The X Factor Philippines,” hosted by KC Concepcion and airs weekends on ABS-CBN. The finale is getting nearer as only six finalists compete for the title.