Menu
Search
From out of the wreckage of the American Civil War, the great state of Nevada came into being on October 31st, 1864. Its creation immediately helped to secure the re-election of Abraham Lincoln, the passage of the Thirteenth Amendment and, ultimately, the future of the union. 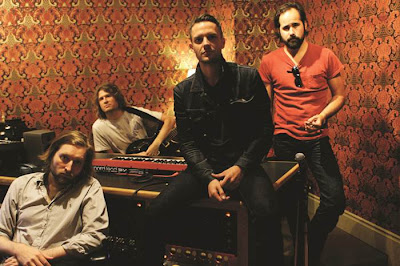 Today, that proud but painful history is enshrined in the two words emblazoned on the upper left-hand corner of the state flag: ‘BATTLE BORN’.

That phrase has always resonated with Brandon Flowers. It’s what THE KILLERS named their studio in Las Vegas, and when the band reconvened last May to start work on the follow-up to 2008’s Day & Age, it became first a song title, then a thematic touchstone, and eventually the name of the album itself. But not all battles are blood and thunder: after a yearlong hiatus that saw three of the four Killers launch solo careers, they quickly discovered that timing and circumstance can be daunting adversaries in their own right. Safe to say, Battle Born’s title was well-earned. “It’s the hardest thing I’ve ever done, no question,” says Brandon. “It’s the longest we’ve ever taken to make a record, and the longest I’ve ever spent on the lyrics. We thought we had enough songs, but then we realised that we didn’t, and so we had to pound away and grind it out until we were certain that we were ready.”

After Brandon, Mark and Ronnie had all dabbled successfully in solo waters, it was the band’s rapturous live return headlining last April’s inaugural Lollapalooza festival in Chile that convinced them to write some songs together. After a few days, the song they all ended up coalescing around was Battle Born’s eventual lead single, Runaways.  A small-town drama of epic-scale proportions, Runaways is everything you could wish for from a Killers comeback single; an unmistakably American expression of romance and optimism that heralds their return with cyclonic, Who-esque guitars and a chorus big enough to be bellowed from one end of the Mojave to the other.

Battle Born is said to be The Killers’ strongest record to date and its triumph lies in the incorporation of elements of the records that came before it without sounding overtly like any other Killers song in particular. It’s the sound of a band recognizing – and celebrating – their own identity. To borrow Brandon’s maxim, Battle Born is THE KILLERS “Doing what we do best.” Furthermore, Battle Born is also said to be the latest and greatest chapter of THE KILLERS, yet Ronnie remains adamant that, “Every record is a proving ground. We feel like we need to keep upping the ante with every new one we put out. We’ve got no interest in resting on our laurels.”

Meanwhile, with the record now finally in the can, all four members are eager to get it out on the road and re-introduce the world to THE KILLERS, starting with a series of American and European dates this summer. “I feel like there are a lot of live moments on this album, more than we’ve ever had before,” says Brandon. “I feel like people are going to be able to relate to and understand these songs. Pound for pound, this is our strongest record, and I’m really excited about it. We’re starting to feel more comfortable being what we are. And we’re proud of what we are.” Spoken like a true son of the battle-born state.

THE KILLERS’ newest album BATTLE BORN is now available in CDs at Astroplus and Odyssey Music & Video or online via iTunes or www.MyMusicStore.com.ph. Special thanks to: BusinessWorld and HerWord.com