Menu
Search
The number one music magazine comes strong with some of the greatest Pinoy Rock artists back to back on the covers of the newest issue of MYX Magazine. 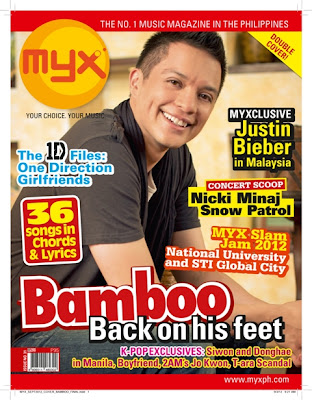 Bamboo Mañalac makes his first MYX Mag appearance as a solo artist. With a different sound and a fresh perspective, Bamboo opens up about his life post-Rivermaya and Bamboo, his thoughts and feelings about his music, the album No Water, No Moon and his plans for the future.

Five bands lead the Pinoy Rock revolution as T5 Bands, Urbandub, Wolfgang, Rico Blanco, Kamikazee and Parokya Ni Edgar, take the massive concert experience to three major cities this year. Find out how these acts are keeping the scene alive while enjoying themselves on tour.

To add more to the OPM fever, get inside the genius mind of Gloc-9 to know the story behind his newest opus, MKNM: Mga Kwento Ng Makata and his controversial hit, “Sirena”.

MYX Mag also takes you to a trip down the Eraserheads memory lane as it brings you inside The Reunion: An Eraserheads Tribute Concert as rock acts play their own versions of some of the E-heads hits!

Technology has brought us some of the most awesome exclusives like the Skype party with Jessica Sanchez and the Southeast Asian video conference with 2AM’s Jo Kwon!

Be updated with the hottest concert scoop featuring Nicki Minaj’s Pink Friday Tour and Snow Patrol’s Fallen Empires Tour and Find out the likes and dislikes of the newest MYX VJs Michael, Michelle and K.A.

MYX Mag has also something in store for K-Pop fans, Beliebers and Juan Directioners! The magazine will also reveal the three lucky winners of the One Direction “Up All Night: The Live Tour” DVDs.