Menu
Search
While the Philippines (and the world!) hasn’t fully recovered with Carly Rae Jepsen’s sensational hit ‘Call Me Maybe” just yet, a South Korean singer by the name of PSY is catching up quickly with his new single “Gangnam Style” — possibly being ‘The Next BIGGEST HIT of 2012’. 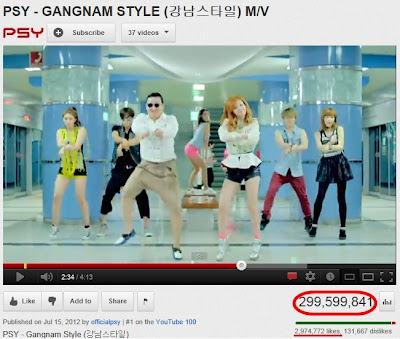 YouTube revealed their chart for the “Most Viewed Videos” and PSY’s “Gangnam Style” music video came out on top with nearly 300 million views in all categories!

It is by far the most watched video on YouTube, as the second highest viewed clip is Justin Bieber’s “As Long As You Love Me,” which generated slightly over 54 million views in the same period.

Add to that, this viral hit, which has only been available to view since July 15, has been ‘liked’ in excess of 2,141,758 times, making it the most liked video in YouTube history.The closest competitors for most liked video on YouTube include LMFAO’s ‘Party Rock Anthem’ with 1,574,963 likes and Justin’s Bieber’s ‘Baby’ with 1,327,147 likes.(Source: Guinness World Record).

The single “GANGNAM STYLE” by PSY is part of the HOTTEST HITS EVER 3 compilation CD along with the hits Payphone (Maroon 5), Call Me Maybe (Carly Rae Jepsen), Boyfriend (Justin Bieber), Starships (Nicki Minaj), Where Have You Been (Rihanna), Good Time (Owl City & Carly Rae Jepsen) and Lights (Ellie Goulding) among others.

This awesome album will be released on October 8 exclusively under MCA Music available at Astroplus and Odyssey Music & Video. Download this hot new singlevia iTunes or www.MyMusicStore.com.ph