Menu
Search
Platinum-selling singer-songwriter and musician, Greyson Chance, has sent his Filipino fans into an online frenzy with the announcement of his Truth Be Told part 1launch happening at the Ayala Malls this November 11. 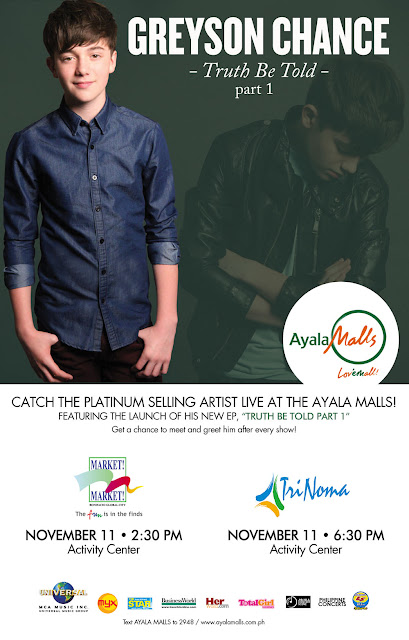 Greyson’shighly-anticipated EP will be released nationwide starting October 29. Entitled Truth Be Told part 1, the album will be released exclusively under MCA Music (Universal Music Philippines) and will contain five tracks namely “You Might Be the One”, “Leila”, “California Sky”, “Take My Heart” and the uplifting new single, “Sunshine & City Lights”, which is the first taste of the new music he has been working on for nearly a year. While he continues to work on a full-length album to be released in 2013, Greyson has decided to give fans a taste of what’s to come through this new single and EP. “The new stuff is much more stripped down and organic. I wrote all the songs so that they have this personal connection when one listens. My goal is that when someone listens to the new stuff, they feel this overwhelming connection. I want them to understand it! ‘Cause at the end of the day, art must come and connect to the heart not the mind. #truthbetold,”Greyson tweeted.

Ayala Malls, home to the best live entertainment continues its tradition of bringing some of the most remarkable performances of both foreign and local acts in the country as it presents 15 year old American teen pop singer-songwriter and pianist Greyson Chance for a series of concerts and promotions. He shall be delighting fans with his enthralling voice and amazing talent as he performs at the Ayala malls on November 11, 2012. Catch him at Market! Market! Activity Center at 2:30 pm and TriNoma Activity Center at 6:30 pm, and get a chance to meet and greet him after every show! For more information, visit www.ayalamalls.com.ph

GREYSON CHANCE’s brand new EP TRUTH BE TOLD PART 1is available in CDs at Astroplus and Odyssey Music & Video or online via iTunes or www.MyMusicStore.com.ph