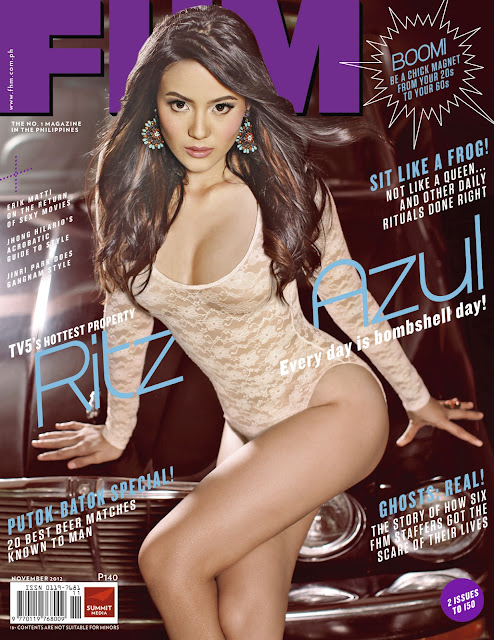 Donning a revealing lace bodysuit for the magazine’s cover, the 18-year-old actress sizzles in her first ever sexy pictorial. The self-proclaimed probinsiyana oozes with a mixture of charming naivete and sexiness that only comes natural to Ritz.

While Ritz is proud and delighted with how her photo shoot turned out, the young star admitted that posing for a men’s magazine was no easy feat.

Ritz, who won fourth runner up in TV5’s former talent search Star Factor, made her acting debut in the primetime series Nagbabagang Bulaklak in 2011. That same year, Ritz bagged the Outstanding Breakthrough Performance by an Actress from the ENPRESS Golden Screen TV Awards and the Amazing Female Newcomer from Yahoo! Philippines OMG Awards. It was also in Nagbabagang Bulaklak where Ritz inadvertently attracted a slew of male fans including FHM’s stable of editors and writers. The editors of the popular magazine admitted that Ritz’s name have always come up in their list of cover girls. And now they are over the moon to have finally featured her as the magazine’s muse-of-the-month since it’s been a while since FHM featured a “debutante” on the cover.

After starring alongside Lorna Tolentino in the soap series Glamorosa, Ritz is faced with another challenge as she stars in TV5’s first superhero drama Kidlat opposite hunk Derek Ramsay.