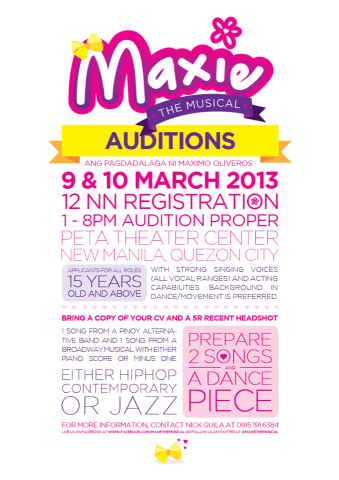 Registration starts at 12 noon. Auditions begin at 1 p.m. and will end 8 p.m.

Auditionees are advised that they are expected to sing, dance and act with equal facility.

The roles are as follows:

MAXIE – Must look 13 -15 years of age. Must be androgenous; able to pass off as both male and female. Has a strong soprano voice. Must be able to dance. If auditioning for this role please prepare a pop song that will showcase your vocal range.

VICTOR – Police officer, object of Maxie’s puppy love, affection.
Must look like in his mid to late 20s. Should be willing to appear on stage in underwear. Strong baritone or tenor voice. Must be able to sing both ballad and rock songs.

PETER – 15-17years of age. A closet bully. Must have comic timing. Background in dance is preferable.

Ensemble players : 15 years old and above with strong singing voices (all vocal ranges) and acting capacities. Be ready to sing 1 song from a PINOY ALTERNATIVE BAND and 1 song from a BROADWAY MUSICAL. Be ready with a dance piece, Either HIPHOP, CONTEMPORARY or JAZZ. Be ready to learn a dance combination

For more information, visit the official Facebook page at www.facebook.com/MaxieTheMusical.