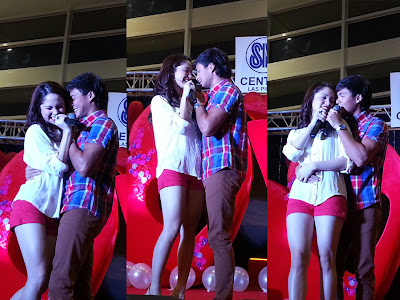 Jessy Mendiola and Matteo Guidicelli’s tandem is now one of the hottest love teams today after it drew a massive crowd last Sunday (Feb 10) during a mall show dubbed as “Love to Love: A Valentine Affair” in SM Center Las Piñas.

The Precious Hearts Romances (PHR) presents Paraiso stars were on their way going to the backstage when fans shrieked especially after seeing Jessy and Matteo holding each other’s hands.

The crowd went crazier and rowdier when the two sang a duet while exchanging intimate looks and physically getting close to each other. Matteo even stole a kiss from Jessy that turned the show’s venue into pandemonium. The “MaJessty” loveteam, as their fans call it, joins the roster of sought-after Kapamilya loveteams such as Kim Chiu and Xian Lim’s KimXi and Kathryn Bernardo and Daniel Padilla’s KathNiel.

Joining Matteo and Jessy in the mall show are fellow cast members Matt Evans, Jewel Mische, and Denise Laurel while Pamu Pamorada who is also in Paraiso and DJ Charlie of Tambayan 101.9. hosted the event.  Don’t miss Precious Hearts Romances presents Paraiso as the story heats up with Brennan’s case being tried in court. What will be the verdict on him?