Menu
Search
From the creators of the “Ice Age” and “Rio” series, “Epic” follows a teenager MK (voiced by Amanda Seyfried) who is transported into a secret forest world then embroiled in a battle between good and evil and has to protect a special flower pod to save the forest where Queen Tara (Beyonce) reigns protected by the Leafmen. 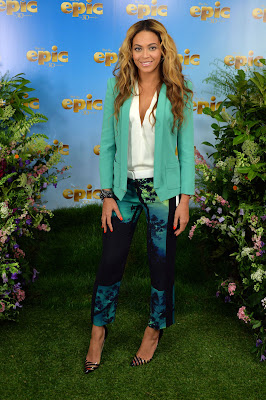 “Epic’s” world, which unites the familiar and the fantastic, is a forest unlike any we’ve seen before: tiny seeds look like boulders; rocks are the size of spiky mountains; flowers are gigantic and complex; and a butterfly is a nothing short of a flying tapestry.

Beyonce loved voicing Queen Tara in the new children’s movie “Epic” — at least once she stopped crying.  Queen B has gone from pop royalty to screen royalty, becoming the forest queen in an animated movie that she hopes her 15-month-old daughter Blue Ivy will be proud of one day.

The film was her first work since giving birth and she says her hormones were raging. “I literally had tears when I played the voice,” Beyonce told The Associated Press in an interview between concerts in London. “There was a scene where Queen Tara picks out her pod and I just imagined seeing my child.”

This role in “Epic” is not the superstar’s only brush with royalty of late. Her recent concert in London on her “Mrs. Carter Show” world tour, the singer inadvertently singled out Princess Eugenie in the crowd to sing with her. The 23-year-old is sixth in line for the British throne. Beyonce giggled as she revealed that she had no idea who Eugenie was.

“‘I didn’t know, and I still don’t know. Someone told me and I don’t know what’s going on, but I hope they had a great time and I hope I didn’t insult anyone, making them sing into the mic,” Beyonce said. “But you know royalty likes to have fun and have a good entertaining night.”

“I’m an artist and I love being able to express myself and I’m not one-dimensional,” she said. “I have different feelings every day and now that I’ve done movies I feel like I can try and recreate these characters on the stage.”

Beautiful, agile and strong, Tara isn’t just the Leafmen’s Queen; she’s the life force of the forest, which she presides over with respect, compassion and humor.  Her unique connection with nature gives her additional and powerful allies.  And when all hope seems lost, she summons help from the most surprising of places.

Tara is nothing less than the forest itself. She has a powerful connection with her land: flowers bloom and bend toward her, and leaves bow to Tara.  “Tara is the heart of the forest, personified, and she’s beloved by her people, called the Jinn,” says Beyoncé.

Beyoncé agrees with Farrell that the film lives up to its grand title. “EPIC is about a massive battle between good and evil, set against a huge landscape you’ve never before experienced in a film,” she points out.  “Everything in EPIC is big – the action, stakes, characters – but at the same time they’re all really relatable.”

Beyoncé found much to admire in Tara, beyond the character’s elegance, powers and royal position.   “What I like most about Tara is that she sets a great example for the people she protects, and Tara is a role model for the younger characters.”

“Epic” (3D) opens May 24 in theaters nationwide from 20th Century Fox to be distributed by Warner Bros.