Menu
Search
GMA News and Public Affairs, the country’s leading broadcast news organization, is proud to present LANDAS, an election special that tackles three of the most pressing issues relevant today as the country gears up for the upcoming elections: hunger, health, and education.

This program aims to guide voters in order to be discerning of the people they will vote into office come May 13. 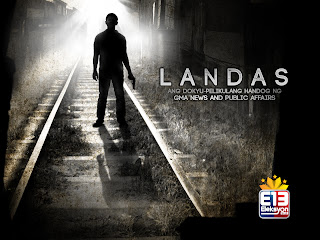 Hosted by multi-awarded broadcast journalist Vicky Morales, LANDAS is a landmark production for GMA combining the documentary and narrative fiction genres. While the documentary portion delivers insightful and eye-opening features the network is recognized for, the fictional film will be reflective and complementary to the issues discussed in the documentary and will star Mike Tan, Joyce Ching, Neil Ryan Sese, Nanding Josef, and Chynna Ortaleza, among other notable actors.

The documentary component of LANDAS takes viewers to some of the remotest towns in the country where poverty is an everyday reality.

Armed with dried leaves and potions, a 103-year-old medicine man softly chants his prayers to restore the health of folks who can only repay his kindness with cassavas and bananas. This is a reality for several barangays in the South, where many residents turn to local medicine men to cure them of their illnesses — from simple skin sores to swelling bellies. The nearest hospital is more than an hour’s walk, and most residents are penniless.

A baby in another town is given coffee made from burnt rice leftovers to relieve a hungry stomach. An indigenous group relies on volunteers who teach them how to read and write. The country’s economy is said to be growing but it is yet to be felt by the poor majority.

The fiction component of LANDAS tells the story of “Jay”, played by Mike Tan, who finds himself at a crossroads. Tasked to silence a Commission on Audit officer (played by China Ortaleza) who threatens to expose corruption involving the Mayor (played by Nanding Josef), it’s up to “Jay” to decide the fate of his town, and in turn, his own future.

LANDAS: The GMA News and Public Affairs Election Special will air this Sunday, May 5, at 10:30pm on GMA-7.