Menu
Search
Famous for their all-time hits such as “Hotel California”, “I Can’t Tell You Why”, “Desperado”, “New Kid In Town”, “Life in the Fast Lane”, “Lyin’ Eyes” and so much more, American rock band The Eagles have already sold more than 120 million albums worldwide, earned five No. 1 U.S. singles and six GRAMMY® Awards. 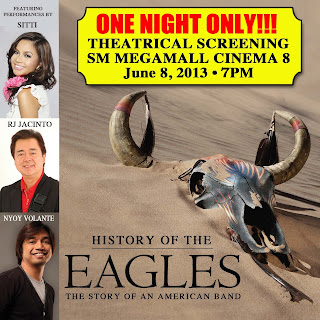 As a tribute to one of the greatest American bands ever known, MCA Music (Universal Music Philippines) together with RJ 100 and Astroplus/Astrovision, present the THEATRICAL PREMIERE of “HISTORY OF THE EAGLES PART 1 (The Story of An American Band)” — an exclusive one night only event of the iconic band’s acclaimed documentary film. The screening will be held at SM Megamall, Cinema 8 on June 8, 2013 (Saturday), 7 in the evening with a special Eagles tribute opening act performance by RJ Jacinto, Sitti Navarro and NyoyVolante. Part 1 dedicates two hours to the chronicling of the band’s creation and rise to fame in the 1970’s through its breakup in 1980.  More than 25 new and exclusive interviews were conducted with all current band members — Glenn Frey, Don Henley, Joe Walsh and Timothy B. Schmit – as well as former members Bernie Leadon, Randy Meisner and Don Felder.  Also featured are new and exclusive interviews with Jackson Browne, Linda Ronstadt, Kenny Rogers, Irving Azoff and many other seminal artists and band contemporaries who have been closely involved with the Eagles’ history.

Seeking to provide an unprecedented and intimate look into the history of the band and the legacy of its music, The Eagles partnered with Academy Award-winning filmmaker Alex Gibney (Taxi to the Dark Side, Enron: The Smartest Guys in the Room) to produce the film.  Directed by Alison Ellwood (Magic Trip: Ken Kesey’s Search for a Kool Place), History of The Eagles is a meticulous creation featuring rare archival material, concert footage, and never-before-seen home movies that explore the evolution and enduring popularity of one of the world’s biggest-selling and culturally significant American bands.

History of The Eagles is released exclusively under MCA Music (Universal Music Philippines) in both DVD and Blu-ray two-disc configurations – all with 5.1 Surround Sound and Stereo audio.  A Deluxe Box Set will be launched at the theatrical premiere date as a limited edition, complete with all three DVD discs (Parts One & Two, and, the bonus 1977 Capital Centre live concert); a 40-page hardback book featuring still photos from the films, all presented in a bespoke hard case box.