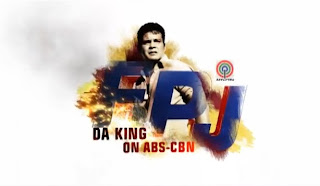 The memory of the one and only Fernando Poe Jr. remains indelible in the hearts of Filipinos as the airing of “Eseng ng Tondo,” the first offering of ABS-CBN’s new “FPJ Da King on ABS-CBN” movie block, rated strongly on its timeslot.

Based on data from Kantar Media last Sunday (Sept 8), the movie registered a national TV rating of 18.2%, or seven points higher than GMA’s Kapuso Movie Festival that only recorded 11.2%.

Watch FPJ as he fights for the oppressed this Sunday (Sept 15) in “Kapag Puno na ang Salop” where he plays the role of Sgt. Gani Guerrero. He will face the mastermind of several deaths in their town, the wealthy and influential Judge Ricardo Valderama (Eddie Garcia).