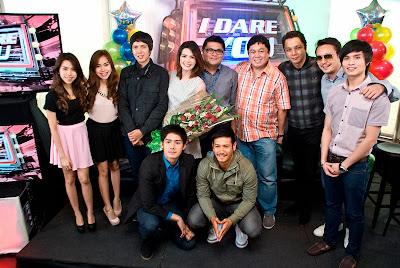 ABS-CBN’s realiserye “I Dare You” will lead the journey towards change as it shows celebrities and extraordinary Filipinos teaming up to face real-life challenges in a more daring and inspiring second season, which premieres on Saturday (Oct 12) on ABS-CBN.

Hosted by John Prats, former “Pinoy Big Brother” housemate Deniesse Aguilar, Robi Domingo, and Melai Cantiveros, “I Dare You” will test the spirit, determination, and partnership of the “Celebrity Kakampi” and “Bidang Kapamilya,” who will work together to accomplish tasks. 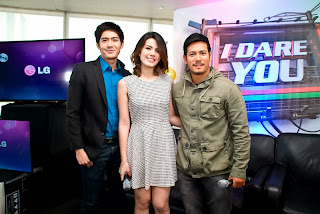 The Bidang Kapamilya are everyday Filipinos and unsung heroes who bravely confront tough challenges such as firemen, sports coaches, farmers, athletes, soldiers, traffic aides, teachers, and many others.

If Season 1 focused on the series of tasks celebrities had to go through to win a reward for the Bidang Kapamilya, Season 2 will highlight the participants’ life-changing journey to foster positive change for themselves, their families, and their communities.
John shared that in Season 2, he and his co-hosts immerse directly and extensively in the Bidang Kapamilya’s world and get to experience the same challenges the celebrities have to go through.

“What’s good about this season is the immersion. We don’t just do something for a day, like sell something at a wet market, and that’s it. Now I understand other people’s lives better. I didn’t think I would be able to overcome what I did, but something was at stake, so I just did what I had to do. It feels good to be able to help others,” said John.

According to Robi, some celebrities even live and work with the Bidang Kapamilya for long periods, from five days to almost a month.

“‘Some celebrities don’t go home on a daily basis, and if they do, they come back to establish a connection, to relive the life of the Bidang Kapamilya. It’s reality at its finest,” he said.

He added, “In the program, we will show that you don’t have to be an Andres Bonifacio or a Jose Rizal to be a hero. We will showcase people who may be doing simple things but have a big impact on others, who don’t look for extravagance and credit. These stories are worth-sharing and inspiring.”

Hosting newbie Deniesse, meanwhile, is very excited or her first hosting project right after leaving the Big Brother house. She shared that aside from articulating spiels properly, she also learned how to mingle and relate to the Bidang Kapamilya.

“This is a huge opportunity and break for me. I’m very thankful for this because it helped me grow as a host and as a person,” said Deniesse.

Deniesse also noted that while she and her co-hosts have different roles in the realiserye, she will act as the ‘kabarkada’ who will listen to the participants’ grievances and ease their burden.

Facebook, Twitter or Google+. Invite us to your events and gatherings for a write-up or coverage: press/blog conferences, product launching, food tasting, demonstrations, exhibits, advocacy events, etc. If you have something to say – comments, suggestions, reactions, don’t hesitate to post a comment below. For more, email us at [email protected]