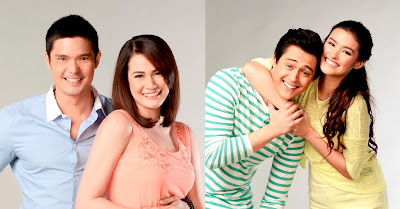 As part of its 20th anniversary celebration, Star Cinema brings together two exciting new screen pairings in “She’s The One”.

This movie, which opens on October 16 in more than 120 theaters nationwide, features two-time Best Actor winner Dingdong Dantes in his first-ever team-up and the box office queen Bea Alonzo in a story about two best friends who find themselves pushed into a complicated romantic situation.

Making this movie a potentially bigger audience draw is the addition of a second new screen tandem in Enrique Gil—dubbed “The Next Ultimate Leading Man”—and Star Magic 2013 discovery and emerging ‘It Girl’ Liza Soberano, who play important roles in the movie.

For their first team-up, Star Cinema wanted a fresh, exciting concept and found it in the story of “She’s The One” written by Charlene Sawit- Esguerra, Anton C. Santamaria, Roumella Nina Monge and the award-winning screenwriter and Star Cinema’s Creative Director Vanessa Valdez. It has all the elements that have made Star Cinema romance movies big hits—like those killer lines of dialogue—but updated for today’s social media-driven generation. It’s a story of friendship, and of those unexpected “Eureka moments” when you realize that the one you’ve always taken for granted just might be “the one”.

Directed by Mae Czarina Cruz, “She’s The One” is about how a long-time friendship can change because of one crazy circumstance that forces two friends to re-evaluate how they feel for each other in this new generation of Facebook, Twitter and viral videos.

When she found out she was going to be working with Dingdong, Bea became very excited. Dingdong had worked with some of the Kapamilya network’s top leading ladies in Kris Aquino (Segunda Mano), Angel Locsin and Angelica Panganiban (One More Try), but this would be his first time to star opposite Bea, who’s glad she was the one chosen for the project. “Matagal ko na siyang gustong makatrabaho because I’ve heard a lot of good things about him,” says the actress.

Dingdong, for his part, says working outside his home studio is always an exciting thing. After two movies with Star Cinema, he wasn’t expecting to make a third, but was given the opportunity to do so. He describes the experience of working with Bea as “sobrang gaan” and Bea herself as “sobrang bait”.

It’s Dingdong’s first time to try the romance genre after doing a horror movie and a heavy drama.

“I’m so happy that I was given the chance to do this movie, and much more when I found out that I’ll be working with Bea and Enrique,” says Dingdong. “I guess nandoon ‘yung excitement namin pareho ni Bea, for us to portray roles in this kind of a movie about best friends and love.”

The award-winning actor had so much fun making the movie that he can’t wait for the audience to see it when it opens on October 16: “I think I can speak for myself, umpisa pa lang na sobrang excited na excited na ako dito and siguro ‘yun din ang naging dahilan kung bakit nagiging maganda ‘yung resulta ng samahan namin oscreen.”

Because of its casting and storyline, “She’s The One” is easily one of the most anticipated movies of 2013—so make sure you don’t get left out when it opens next week October 16.

For more updates about the movie, visit Star Cinema on the web at www.StarCinema.com.ph, on Facebook at http://facebook.com/StarCinema andhttp://twitter.com/StarCinema.