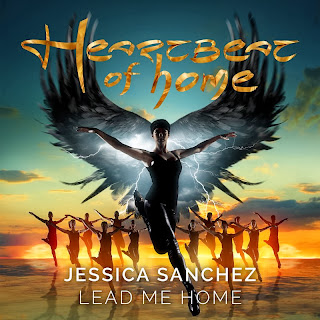 As a young singer of Philippine decent, Sanchez and the Decca label have partnered to donate $0.90 from each single sold of “Lead Me Home” to the Red Cross to support those affected by Typhoon Yolanda in the region.

On the heels of the new single, Sanchez was also able to perform both the Philippine National Anthem and the U.S. National Anthem last November 24th during the Pacquiao-Rios fight in Macao where Pacquiao dedicated his fight for all the victims of Typhoon Haiyan / Yolanda. As part of her ongoing charitable work, Sanchez will also visit the Philippines in December on a mission with the Starkey Hearing Foundation to assist residents with hearing loss who have no resources to acquire hearing aids.

Hearbeat of Home, the new music and dance spectacular from the producers of Riverdance, lovingly encompasses a diverse array of multi-cultural influences, blending the thunder and drama of Irish dance with the sultriness and attitude of Latin American salsa, and the glorious rhythms of Africa.  Three years in the making, Hearbeat of Home features original music by Golden Globe-nominated composer Brian Byrne and lyrics by award-winning writer Joseph O’Connor, and will be featured on PBS stations across the country in the month of March (check local listings).  A documentary on the making of the show will also air on select PBS stations this December.  In early 2014, the stage show will also make its North American debut at Toronto’s Ed Mirvish Theatre January 21st through March 2nd, with a series of shows to follow at Chicago’s Oriental Theatre March 4th through 16th, Detroit’s Fisher Theatre March 18th through 23rd and Boston’s Wang Theatre March 25th through April 6th.  More U.S. live dates will be announced soon.

Listen and download Jessica Sanchez’ newest single “Lead Me Home” online via SPINNR (The One-Stop Music Portal for All Your Music Needs!) – http://www.spinnr.ph/  or iTunes – http://smarturl.it/JS-LeadMeHome. For more information and to start downloading your favorite songs, just log on to www.spinnr.ph via web or download the SPINNR Google Play app.  For updates on SPINNRS latest promos that can let you meet your favorite music artists, join facebook.com/SpinnrPhilippines or follow @SpinnrPH on Twitter and Instagram.