He’s Olaf and he likes warm hugs. Sprung from the Snow Queen’s magical powers, Olaf is by far the friendliest snowman to walk the mountains above Arendelle, in Walt Disney Animation Studios’ stunning big-screen comedy-adventure “Frozen.”

His innocence, outgoing personality and uncanny ability to disassemble himself at good and not-so-good times lead to some awkward, albeit laughable moments. He may also have the world’s most impossible dream, but what he doesn’t know won’t melt him—or will it? 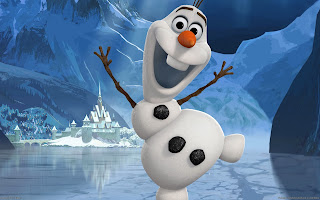 Comedian Josh Gad (“The Internship,” “JOBS”) lends his voice to the affable snowman. “While technically he doesn’t have one, Olaf’s got the biggest heart in the world,” says Gad. “He lives to love. And he really cares deeply about these new friends he’s found—Anna, Kristoff and Sven. The joy that he has in experiencing this family for the first time is the truth of the film that the audience will relate to the most.”

In “Frozen,” fearless optimist Anna (voice of Kristen Bell) sets off on an epic journey—teaming up with rugged mountain man Kristoff (voice of Jonathan Groff) and his loyal reindeer Sven—to find her sister Elsa (voice of Idina Menzel), whose icy powers have trapped the kingdom of Arendelle in eternal winter. Encountering Everest-like conditions, mystical trolls and a hilarious snowman named Olaf, Anna and Kristoff battle the elements in a race to save the kingdom. 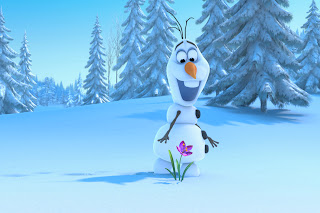 “Olaf represents that pure innocence and childhood joy,” says director Jennifer Lee. “The minute we imbued him with that, he just took off. He’s funny in a way that children are funny. He’s completely unaffected by the world. He’s the one character who isn’t struggling with fear versus love. He is love.”

“Olaf went through many iterations in development,” continues Lee. “He had so much potential. We found him as soon as we asked, ‘How does a snowman think?’ I started writing Olaf as a pre-teen boy—maybe 12—who’s playful, direct, more sophisticated than a little boy, but still innocent. Then Josh Gad came in and we decided to play with the character in the scene in which Anna and Kristoff meet him for the first time. We had a blast adlibbing and discovering exactly who Olaf is. It was perfect. We never re-recorded that scene.
“There’s something so poignant and emotional about Olaf that makes him effortlessly funny,” Lee adds. “I don’t think anyone could do that but Josh.” 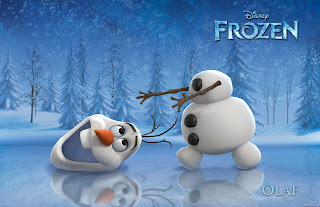 “We want to ground the comedy and drama within the characters and situations,” notes producer Peter Del Vecho. “Olaf is one of the funniest characters in the movie, but he also has an innocent view of the world, which allows him to say things that go right to the heart very quickly.”

Filmmakers hoped to take full advantage of what Olaf offered in terms of his snowman construction, so they called on the technology team to create software called Spaces that allowed artists to deconstruct the character—and rebuild him—as part of the animation process. “For the animation team, Olaf was like a giant toy box,” says director Chris Buck. “He’s made up of three balls of snow that can break apart and come together in different ways. His eyes can move around, his nose can slide in and out and off. His stick arms came off. Animators could do anything with him.”

Opening across the Philippines in 3D and 2D on Nov. 27, “Frozen” is distributed by Walt Disney Studios Motion Pictures International through Columbia Pictures.