Kapamilya star Angel Locsin took to her Instagram Stories to congratulate Solicitor General Jose Calida as he appeared to be the second highest-paid government official in 2019 according to the latest report from the Commission on Audit (COA) released on Wednesday.

The COA’s 2019 Report on Salaries and Allowances or ROSA indicated that he received over Php 16.952 million last year and in 2018, he was in the 6th spot.

According to the reports, Calida received a salary of P2.91 million last year, and monetary benefits, including honorariums, reaching P11.91 million. He also received P288,500 in allowances, P550,618 in bonuses, and P312,000 in discretionary funds last year.

The Kapamilya actress congratulated the solicitor general for almost topping the list. 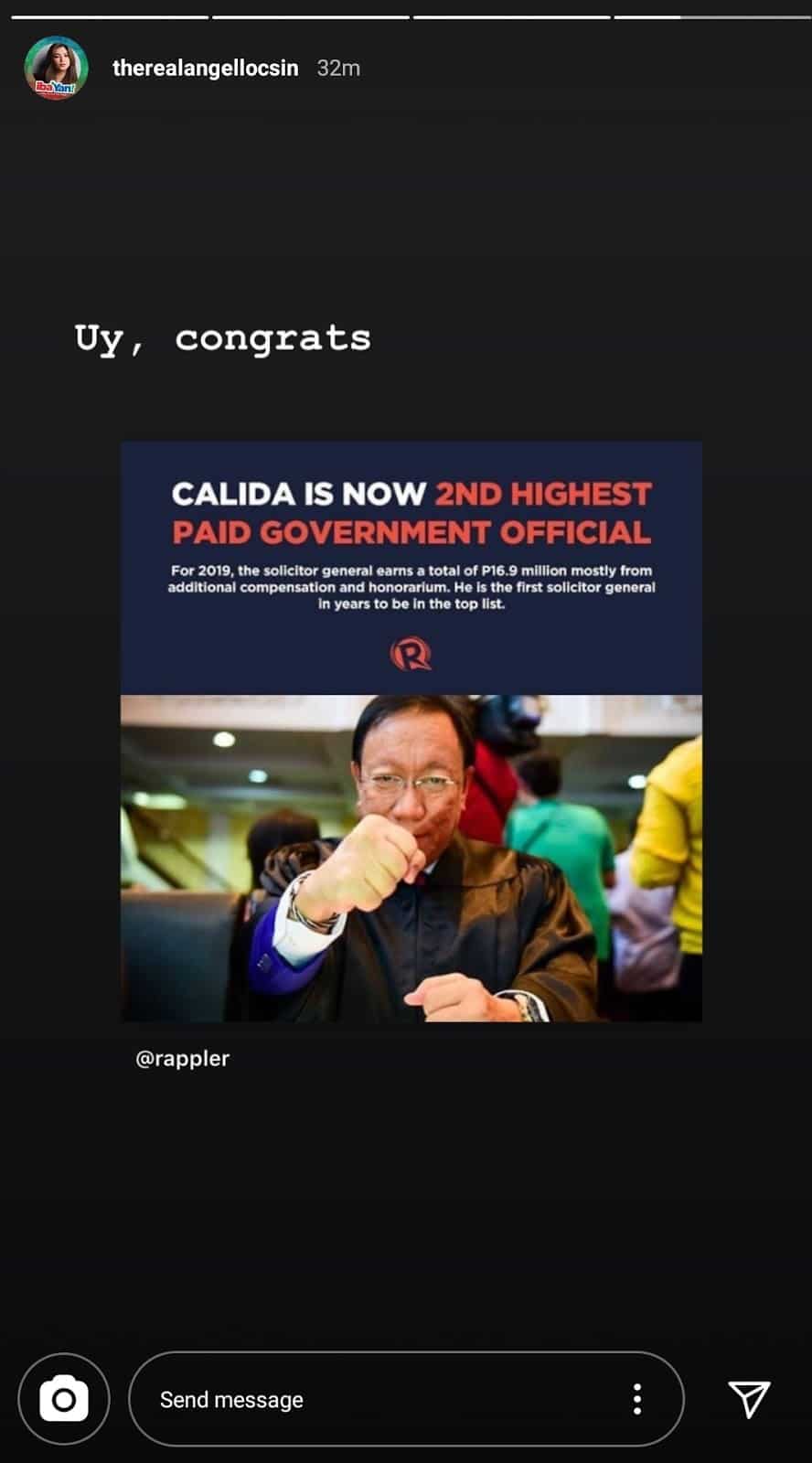 Angel’s statement clearly shows how she was being sarcastic about it, considering the solicitor general was the one who filed the quo warranto petition against the ABS-CBN and advised the National Telecommunications Commission (NTC) to shut down the network.

The TOP 10 highest-paid government officials of 2019 are as follows:

Calida has long enjoyed the trust of President Duterte and is widely regarded as his alter ego in the administration’s legal battles against its critics. He also filed the quo warranto petition against Maria Lourdes Sereno that led to her ouster as chief justice and used the same legal tactic against embattled network ABS-CBN.

On July 10, 2020, after a series of thorough hearings, the House Committee on Legislative Franchises denied the renewal of ABS-CBN’s franchise with an overwhelming 70 affirmative votes in favor of the “Resolution Denying the Franchise Application of ABS-CBN Corporation to Construct, Install, Establish, Operate, and Maintain Radio and Broadcasting Stations in the Philippines,” as against 11 who voted in the negative.

“And now, the end has come,” said Calida over the House committee’s “killing” of the franchise renewal bills of the ABS-CBN network.

Calida was proud of his initiative with his Office of the Solicitor General (OSG) being the one to have “brought ABS-CBN’s violations to the attention of the public,” referring to the quo warranto petition he filed before the Supreme Court in February.

In the interview with Calida on July 11, he stated that the congress has done its job well pertaining to the decision made to shut down the operation of the media company. He thanked the people who voted in favor of the Committee Resolution and praised Congress for giving a fair trial on the issue.

“Indeed, Congress, through the joint committees, not only exercised its constitutional mandate, but also fulfilled Speaker Alan Peter S. Cayetano’s promise to the Filipino people that ‘the hearings [would] be fair, impartial, comprehensive and thorough, and that “[a]ll voices [would] be heard and all issues for and against [would] be discussed,” he added.

“Justice has been served,” he said in a statement.

Calida also said that he saw the violations committed by ABS-CBN as early as January 2020 which was why he decided to file the quo warranto petition before the Supreme Court questioned the ownership of the network.

With the network’s shutdown, many ABS-CBN employees will be retrenched amid the COVID-19 pandemic. The network’s talents and supporters have been very vocal towards the cries of the people who are in need of stable employment and as well as the injustices that the ABS-CBN faced.

Angel Locsin has been extremely active in expressing her support for the ABS-CBN network’s franchise renewal. She has been fighting for the sake of the people and her home network as well.

She is also known as one of the most charitable celebrities in the country. She raised almost P11 million to help the Philippines’ medical frontliners from March to April 2020. She also helped provide sleeping tents for these frontliners and teamed up with friends and colleagues to put up the #UniTentWeStandPH campaign, raising a total of P10,956,702.98 to help more than 28 hospitals put up specialized tents for COVID-19 patients.

Angel Locsin is a famous actress and endorser in the Philippines, best known for her portrayal of the superhero Darna. The actress is currently engaged to her partner, Neil Arce. They were scheduled to get married this year but have put it on hold due to the COVID-19 pandemic.