The song’s bouncy and playful production juxtaposes lyrics that express regrets about a past relationship. “I guess I just have bad taste,” she cheekily laments before launching into the catchy chorus.

However she’s feeling, Porat doesn’t look fazed in the video as she smiles and dances in various hyper-pigmented scenes, all filmed through a whimsical 90s-esque fish-eye lens. 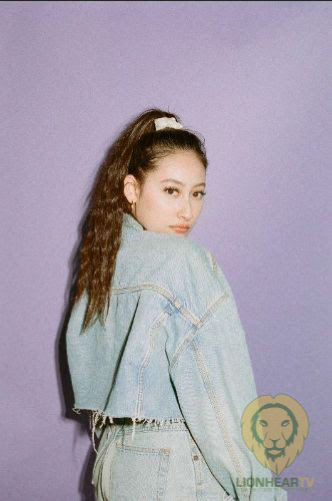 Delivering lighthearted pop with serious skill, Porat effortlessly combines memorable melodies with fresh electronic production and crystalline vocal delivery. Speaking of the song, Porat shares, “It felt like the right thing to pair this sad feeling with a fun upbeat song. I usually use humour to cope with pain and sadness so it felt very real the way the track is the opposite of what I’m trying to say. I’m a dramatic person at times especially when it feels like the end of the world so this song is a great reminder that any negative feelings that I’ve felt in the past are temporary and they do go away. What’s life without a couple ups and downs, you know?”

Director Iris Kim notes, “I wanted the ‘never say ily again’ music video to feel like a vibrant, fever dream for those who are beyond-over-it. We see Alex in this colourful world, whether she’s pouring maple syrup on a tall stack of waffles, pushing a grocery cart in an empty school parking lot or dancing in a hilly park that can very much be compared to the rolling landscape of the Teletubbies, it’s very obvious she’s not taking life too seriously despite the personal content of her lyrics. Alex is living in an enhanced version of life because she’s realizing her worth and having fun while doing it.”

“never say ily again” follows her single “happy for you.” Dreamy and delicate, the bittersweet song details part of the introspective process of a breakup, lilting over a subdued trap beat and gently propulsive guitar melody. The video finds Porat navigating a music video shoot wrought with distraction and longing as she glimpses pictures of her ex on social media.

At the top of the year, Porat released her debut single and video “only hanging out cause i’m lonely,” which landed her on Amazon Music’s 2020 Artists to Watch list. Beneath a vintage bubblegum sheen, the video finds Porat looking onto the futile efforts of three affectionate cuties with regret, woefully uninterested.

The Malaysian-born artist may have grown up across the globe in Toronto, but she’s successfully built a massive fan base in Southeast Asia. Starting out, Porat gained a strong following on YouTube and Instagram for posting covers, then was featured in Glamour Magazine’s video series “You Sang My Song,” where Shawn Mendes reacted to her cover of his song “In My Blood.” 800,000 YouTube subscribers and 100+ million video views later, Porat makes her confident introduction as a fully-fledged songwriter and artist.