The latest survey of Social Weather Stations (SWS) was conducted from July 3 to 6, 2020 through a National Mobile Phone Survey.

The results showed that 51% of adult Filipinos agree with the statement, “It is dangerous to print or broadcast anything critical of the administration, even if it is the truth.” 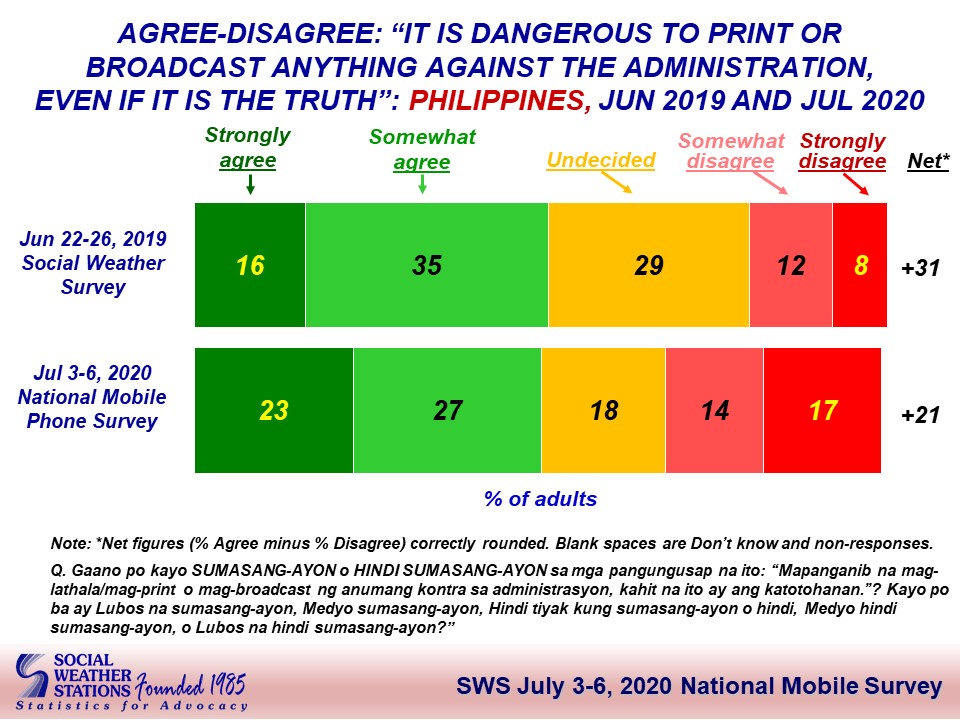 The 51% agreement consists of 23% of people who ‘strongly agree’ and 27% who ‘somewhat agree’ agree with the statement.

On the other hand, 30% disagree with the statement as they think that it is not dangerous to publish stories critical of Duterte Admin while 18% are undecided.

The 30% of people in disagreement with the statement consist of 14% ‘somewhat disagree’ and 17% who ‘strongly disagree.’

The poll said that the survey results showed a net agreement score of +21 (% agree minus % disagree), classified by SWS as “moderate.”

Compared to when last surveyed by SWS, the net agreement that “It is dangerous to print or broadcast anything critical of the administration, even if it is the truth” decreased by 10 points from ‘strong’ +31 in June 2019 to ‘moderate’+21 in July 2020.

The results of the SWS poll came almost a month after the House Committee on Legislative Franchises panel denied the franchise application of ABS-CBN forcing the network to stop its radio and TV broadcast.

The resolution to deny the ABS-CBN franchise application was adopted with 70 committee members voting in favor of the resolution, 11 against, and with 1 abstention and 2 inhibitions.

The application was rejected even after government the Bureau of Internal Revenue (BIR), the Securities and Exchange Commission (SEC), and the Department of Justice (DOJ) cleared ABS-CBN of violations during House panel hearings.

Citing several violations embodying in six segments of the TWG report, the panel denied the franchise application of the Lopez-owned network, sparking protests that it was truly a political decision arising from President Rodrigo Duterte’s publicly stated disdain for the media company.

In December 2019, Duterte said that he will see to it by the following year that ABS-CBN would be out of business.

However, lawmakers known to be the prime oppositors to the ABS-CBN franchise are not yet done with the network weeks after they denied the media giant’s franchise.

It was reported that Sagip Partylist Congressman Rodante Marcoleta filed a resolution seeking to investigate the authenticity of ABS-CBN’s land title which according to him is probably fake.

Representatives Bautista, Duterte, Yap, Defensor, Remulla, Marcoleta and Barzaga file a House Resolution seeking a congressional probe on loans to Lopez Family Businesses that were allegedly written off by the DBP. | via @R_G_Cruz888 pic.twitter.com/0DZDz8CZWO

In his resolution, Marcoleta asked the House of Representatives to form an inquiry in aid of legislation to look into the land title of ABS-CBN compound on Mother Ignacia, Quezon City. 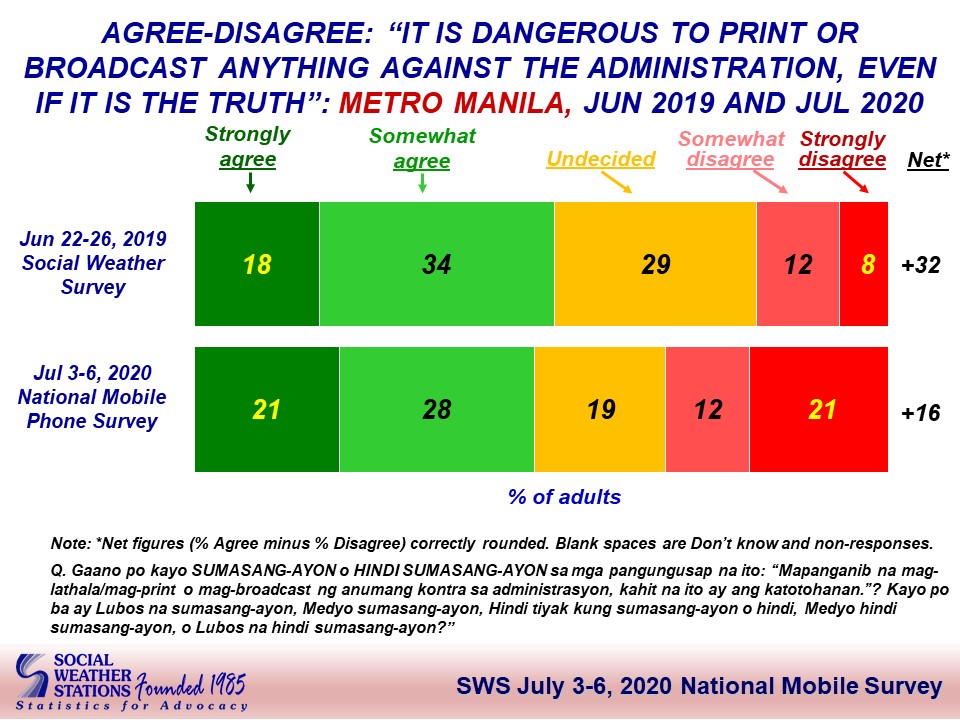 A total of 1,555 adult Filipinos (18 years old and above) nationwide participated in the survey. Of the total number of respondents, 306 are from the National Capital Region, 451 from Balance Luzon, 388 from the Visayas, and 410 from Mindanao.

SWS also said the survey has sampling error margins of ±2 percent for national percentages, ±6 percent for Metro Manila, and ±5 for Balance Luzon, ±5 percent Visayas and ±5 percent in Mindanao. 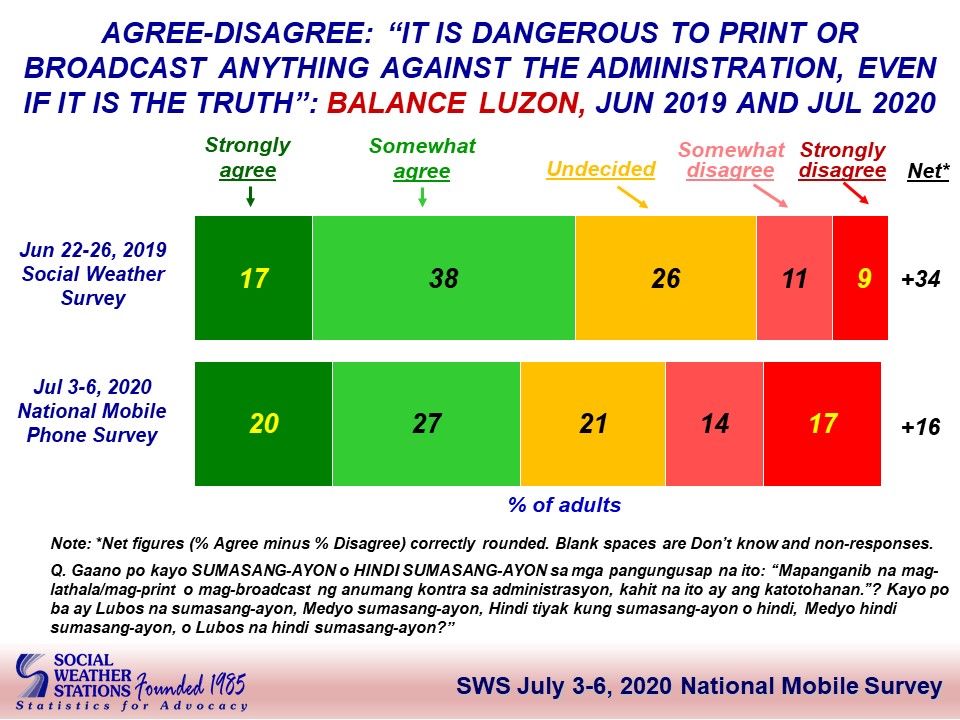 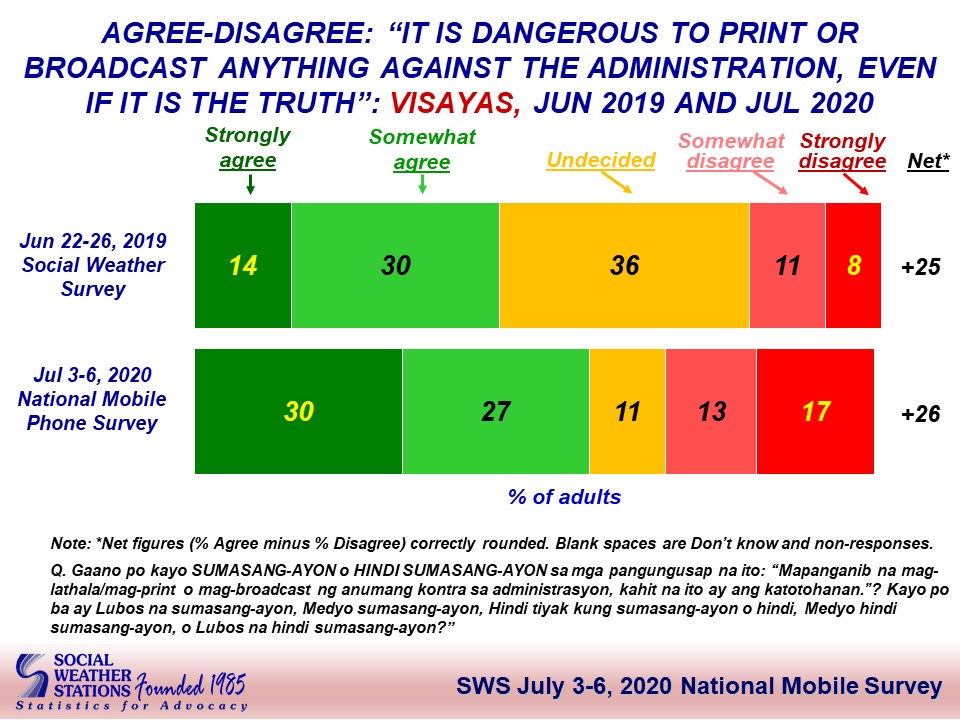 The SWS July 2020 National Mobile Phone Survey was a probability-based survey conducted from July 3 to 6, 2020. 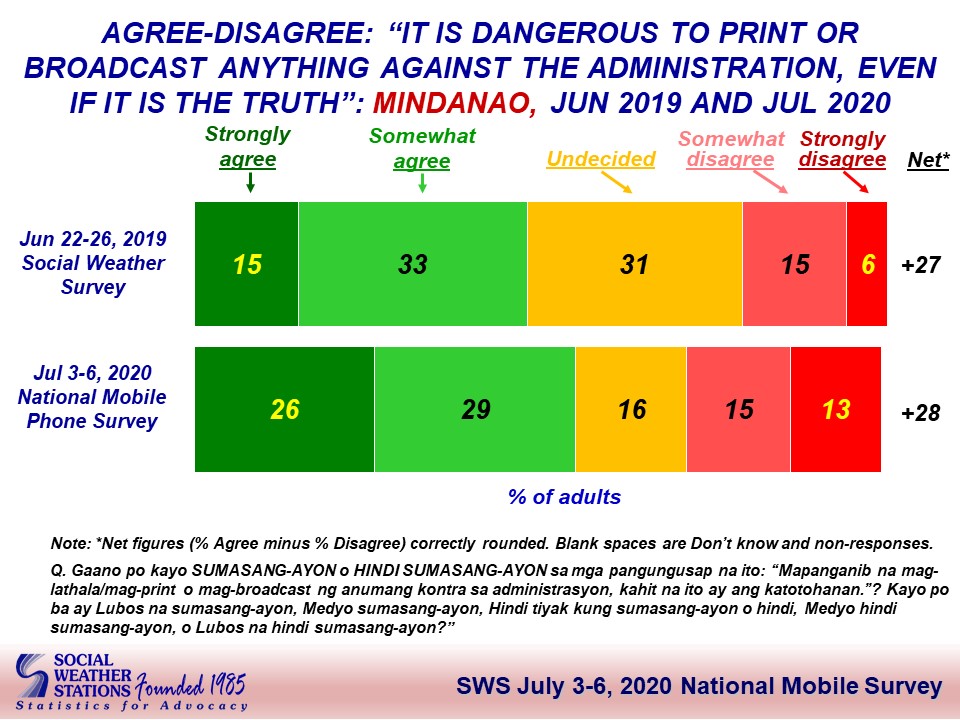 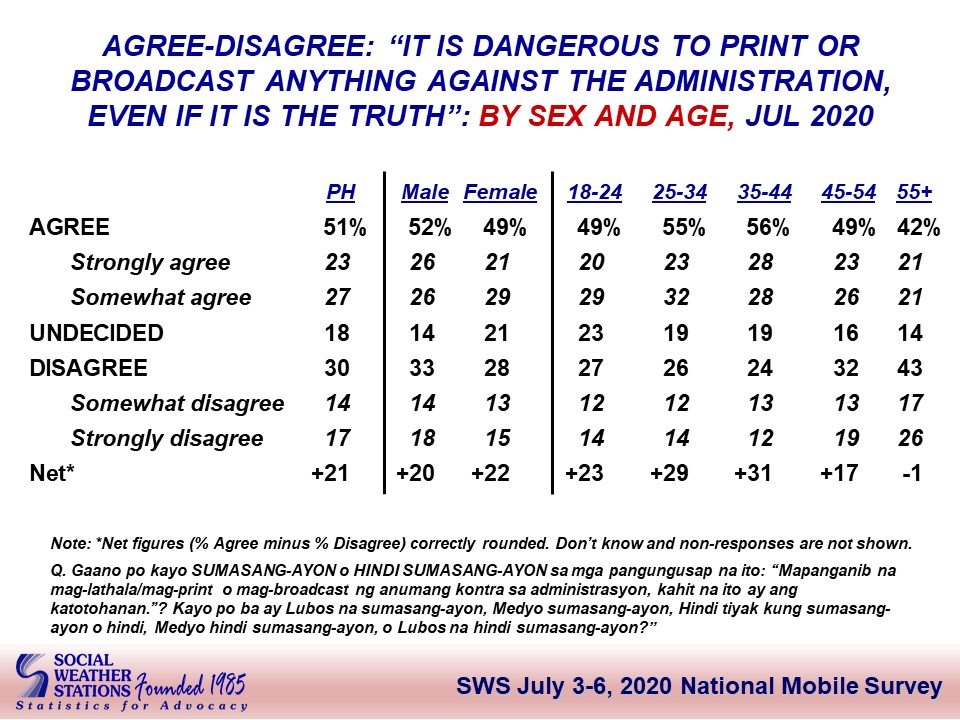 Data were gathered through mobile phone interviews of adult Filipinos (18 years old and above), randomly drawn from a database of mobile phone numbers compiled from SWS national and subnational representative face-to-face surveys since 2017.

To yield census-standard distribution for each study area, census-based population weights by study area and sex were applied to the survey data.

SWS employs its own staff for questionnaire design, sampling, fieldwork, data-processing, and analysis, and does not outsource any of its survey operations. 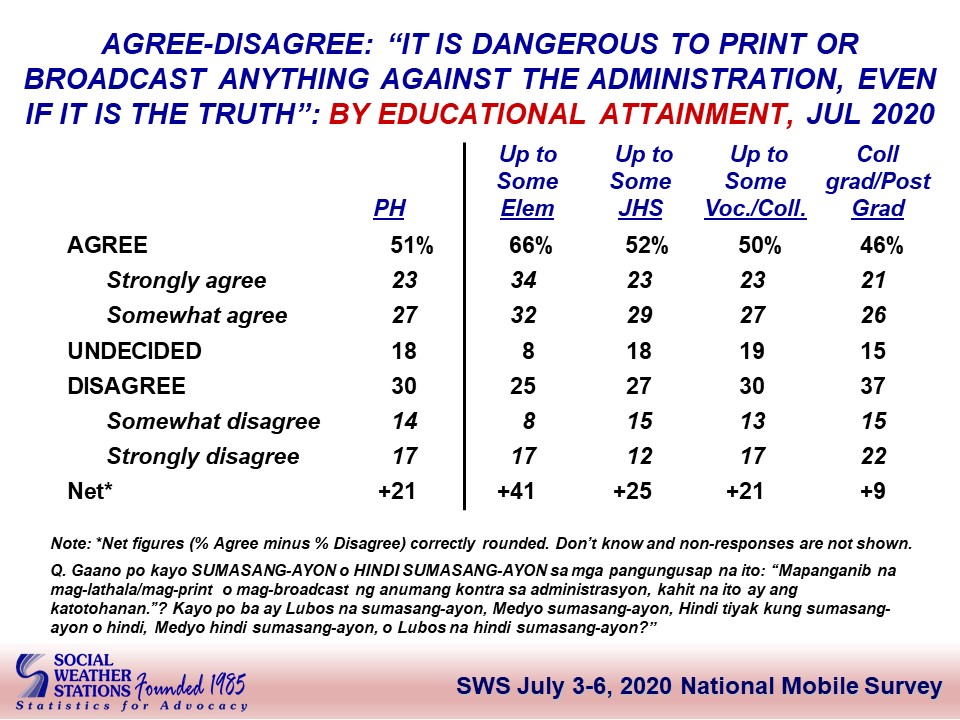