Frankie Pangilinan was recently a guest on Bianca Gonzalez’s vlog. Bianca interviewed Frankie on her YouTube channel regarding her thoughts on how one will be able to have the courage to speak up on different social media platforms.

Frankie is known to be very vocal with her beliefs and for speaking up on relevant issues in society. 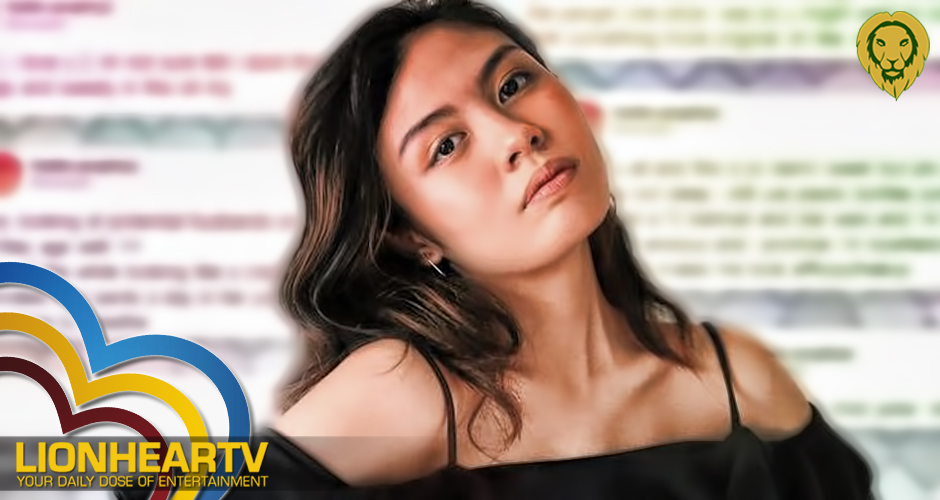 When Bianca asked her for advice on “how to be confident in your own voice,” Frankie answered by saying that it all depends on how much one is passionate about a certain issue.

“I think that it really honestly depends as well on how passionate you are about what you’re talking about,” Frankie said.

“I don’t think that you can access any sort of confidence if it’s not something that you really, truly care about,” she added.

Sharon Cuneta’s daughter valued the importance of diversity in people’s desires and opinions as it allows them to have a passion to fight for.

Frankie mentioned that her love for writing played a big part as to why she became vocal on her Twitter account. Her passion for writing allowed her to realize that she should use this driving force to fuel the things that she’s interested in.

She asked herself “how can I use this [passion] to provide like an outlet for myself and for others to equally express things like that.”

Twitter became a platform for her to express her opinions freely.

“Suntok lang din sa buwan ‘yung mga tweets ko noon. It’s not easy at all but it’s a little not as scary for me I guess to be using Twitter than any other social media platform because I have a certain level of passion for the written word and language,” she explained.

Through her love for writing, she was able to use it as a tool to fight for the rights of the people. That’s why she encourages others to discover their passions as well and use it to help others.

In finding the right platform for people to speak up, she noted that “If we’re really trying to make a real, lasting change in the system, you have to change every part of it. Big or small.”

Frankie also answered the question of how to handle the negativity that comes with sharing your opinion.

She is saddened by the fact that a lot of people are still against her opinion despite believing that what she’s fighting for is the right thing. But she said that she’s already used to negative comments.

“Obviously that’s not an experience I wanna wish on anyone. But at the same time, I think there’s also those low moments where it can really get to you. I like to remind myself primarily na parang the amount of hurt or backlash that I get online, the amount of negativity that I might feel online, it doesn’t compare to the pain and the hurt that are felt by millions of others who I’m trying to fight for,” she noted.

“It might hurt me for now, it’s a temporary kind of hurt, like it might linger pa for a little bit, it doesn’t compare. Cause when you try to make a lasting change, you have to think about everybody else,” she added.

Frankie said that she can take all the criticisms thrown at her because she believes that what she’s fighting for is far more important. She removes herself from the negativity of the situation and just focuses on what she believes in.

Bianca was impressed with the answers that Frankie has given her knowing the fact that it was all spontaneous.

“My gosh, it’s so nice to listen to you. How old are you again?” Bianca asked.

Frankie answered that she is 19 years old and Bianca was amazed that she was already wise beyond her years.

Frankie shared that being the daughter of a public figure helps her cope with the negative comments about her. At first, she was hurt that people are judging her even though she has done nothing wrong. But over time, she learned the value of having patience and understanding with others.

She also keeps in mind the teaching of her politician father Francis Pangilinan lecturing her that she should always put herself in the shoes of others. She learned that the people bashing her also have lives and families of their own. Everyone has a story to tell and she said that it is okay even if she can’t please everyone.

Bianca also asked Frankie for advice on how one can have the courage to post about something. The issue of posting things online is that people fear that others might judge them based on what they post.

Frankie explained that for the fear to be gone, one must identify first the source of the fear and deal with the cause carefully.

“I think a lot of the fear comes from, ‘Baka mali ako,’ like ‘Baka mali ‘yung pag-iisip ko’ or ‘Baka mali ‘yung akala ko,’ etc. So I think the first step to that is find out where the fear is coming from, and then learn more about it,” she explained.

“If you’re really committed to wanting to learn and wanting to help spur a conversation onwards, then it’s your responsibility to learn for yourself and read up,” she added.

Frankie explained that the excuse of possessing insufficient information is not valid anymore as the people are already living in the digital age. She said that people can easily access the internet and read about news or things that they want to learn about.

Frankie keeps on being a great example that one can make a change by simply speaking up about the injustices in society. She is passionate about what she believes in and that’s what people admire about her. That she is not afraid to speak up because she knows that what she’s fighting for is for the benefit of the people.