October 24 marks the first time two Philippine shows that are both adapted from their original Korean versions, are airing head-to-head. 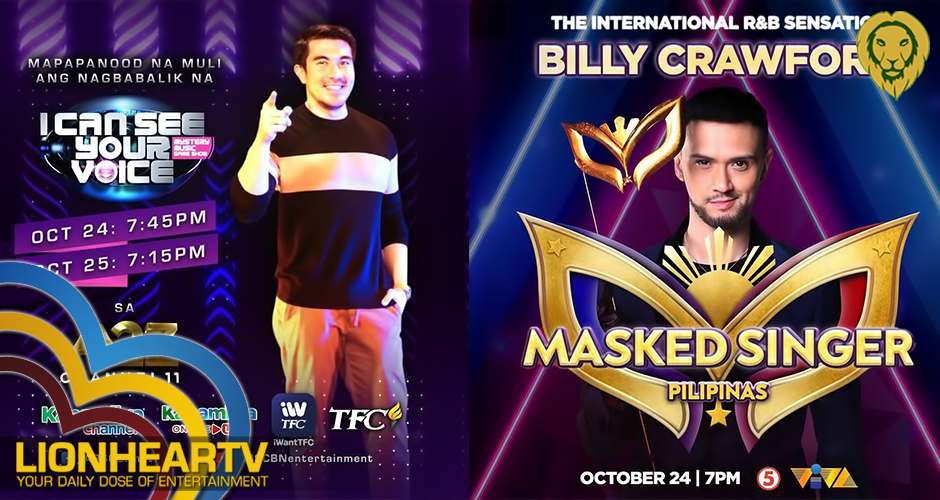 Viva Entertainment’s Masked Singer Pilipinas premieres on TV5 and ABS-CBN’s I Can See Your Voice, returns for a brand new season this weekend.

Masked Singer Pilipinas is the Philippine adaptation of MBC’s King of Mask Singer in South Korea. The show went on to become a global hit and currently has successful franchises in the United States, United Kingdom, among many others.

In the Philippines, attempts to launch a local version of the show began as early as 2016.

Viva Entertainment bought the franchise and made several efforts to strike a deal with TV5 to air the show. It wasn’t only until the middle of the year when it was confirmed that the international hit show is indeed finally making its debut on Philippine television.

I Can See Your Voice, similarly, is a franchise show that originated from South Korea. Debuted on Mnet and tvN in 2015, the show became a massive hit in many countries where it has local franchises.

The Philippine version debuted in 2017 and has since then aired until the pandemic. A new season begins on Saturday, also marking the show’s return to free television after ABS-CBN’s loss of broadcast franchise.

Viva Entertainment tapped multi-awarded tv host and singer Billy Crawford as the show’s presenter, which seems to be a perfect choice, as Crawford has already hosted and judged a number of shows at ABS-CBN. Similarly, I Can See Your Voice’s host, Luis Manzano, maintains an impressive hosting résumé, having presented and hosted more than a dozen reality, talent, and game shows in his home network, ABS-CBN. Interestingly, Crawford and Manzano have worked on a number of shows in ABS-CBN, including Pilipinas Got Talent and World of Dance, which are both local franchises of two massively successful talent shows.

It is also interesting to note that I Can See Your Voice and Masked Singer are not of exactly the same formats. The former is a music mystery game show, while the former is a reality singing search that features celebrities as contestants.

A post shared by Masked Singer Pilipinas (@maskedsingerpilipinas) on Oct 18, 2020 at 4:12am PDT

Masked Singer Pilipinas, has an interesting set of judges. Aga Mulach, who isn’t new to judging talent searches (he served as judge for ABS-CBN’s Boyband Superstar), heads the judging panel, of which Cristine Reyes, Kim Molina, and Matteo Guidicelli are also members. I Can See Your Voice, on the other hand, has Andrew E., Angeline Quinto, Kaladkaren, Long Mejia, Negi, and Eric Nicolas, who are not exactly judges, but are ‘Sing-vestigators’ who either help or confuse the guest player in guessing who the real singers are, which is the main idea of the show.

It will be very exciting how this match will play out. ABS-CBN’s return to free TV via the new channel, A2Z, and Kapamilya Channel’s strengthened online presence expanded reach in cable with CignalTV finally carrying the channel in its line up, means that I Can See Your Voice holds a fighting chance against Masked Singer Pilipinas.

Going head-to-head with each other, I Can See Your Voice’s Season 3 premieres on A2Z Channel 11, Kapamilya Channel and Kapamilya Online Live, while Masked Singer Pilipinas debuts on Phlippine TV via TV5, on October 24.