The fate of the Philippines’ top GR Supra online racers will be determined this weekend, as they bid for the grand title at the GR Supra GT Cup Asia regional finals. 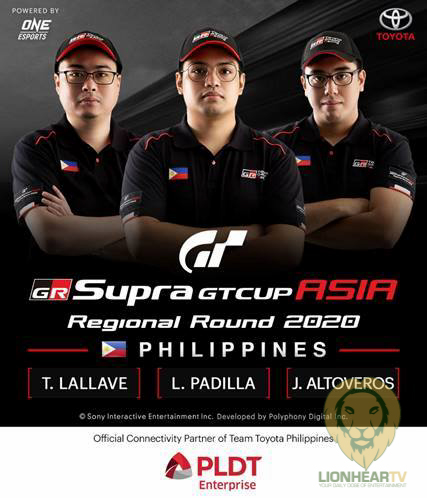 Team Philippines’ story began at the GR Supra GT Cup Asia Philippines – TMP’s first ever e-Motorsport tournament that had hundreds of Filipino online racers competing via GR Supra on Gran Turismo Sport to earn the chance to represent the country at the regional-level challenge.

“We have followed Team Philippines’ journey right from our local qualifying and final rounds and we have seen their determination and indomitable spirit,” said Elijah Marcial, TMP’s Vice President for Marketing Services. “I am confident Terence, Lance, and Jose will not let us down at the regional finals, and they will give their best for the Philippines.”

In preparation for the finals, TMP through its race management partner Tuason Racing conducted couple of training sessions for the drivers to prepare them for the tracks and to foster their race strategies. TMP also sought the help of PLDT Enterprise to provide internet connectivity for the three players during the race with the other Asian teams.

Filipino fans can support and cheer the Team Philippines during the online broadcast via messages of support with the hashtags #GRSupraGTCupAsia and #TeamPhilippines. More information about the e-Motorsport series can be viewed at the One Esports website: https://www.oneesports.gg/grsupragtcupasia2020/ .

This email and any attachment are intended for the individual or entity it is addressed. It may contain information~confidential~and~legally privileged~to Toyota Motor Philippines Corporation (TMP) only which is subject to copyright and other intellectual property protection. Any dissemination, distribution or copying of the same is strictly prohibited. If you are not the intended recipient, please notify the sender by return email and delete the message immediately.
…