DUBAI, UAE, November 2, 2020— More and more Filipinos in the Middle East and Europe are winning big prizes from home by joining “TFC Win From Home,” which had its second live monthly draw last October 24, that was streamed via the Facebook page of TFC Middle East, TFC Europe, and TFC Kapamilya Channel, and on the TFCX Kumu account.

Although they were shocked when their names were announced, Jay, James, and Margie are beyond grateful for winning the Php 50,000 cash prize. For James, who is back working overseas after joining “Pinoy Big Brother 737,” the cash prize will help him save some money while still supporting his family back home. 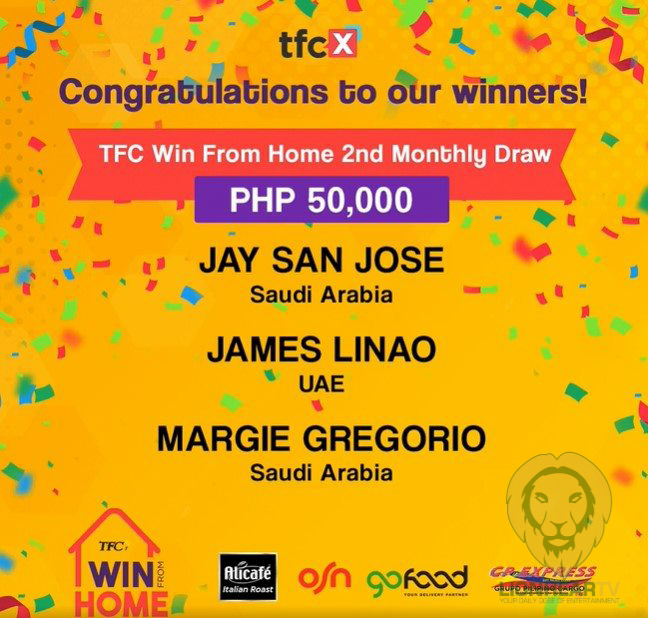 Joining the fun during the second “TFC Win From Home Live” were host Gretchen Ho, JhaiHo, and “Trip to Quiapo” star Enchong Dee.

You still have a chance to be as lucky as Jay, James, and Margie, join “TFC Win From Home” now! Simply visit https://bit.ly/TFCWinFromHome, fill out the necessary details, choose which activity among the five sponsors—TFC, OSN, Alicafé, GoFood, and GP Express Cargo—you would like to join (you may join all of them!), then do the activity being asked to be done by the sponsor of your choice. You may submit as many unique entries as you can until December 14, 2020.

The next “TFC Win From Home Live” will be happening on November 21, 2020, at 1 p.m. UK/5 p.m. DXB/ 9 p.m. MNL where another batch winners of the cash prizes and special prizes will be given away to the overseas Filipinos in the Middle East and Europe, and also from the Asia and Pacific.

Watch “TFC Win From Home Live” via the Facebook pages of TFC Middle East, TFC Europe, and TFC The Filipino Channel. It is also be seen via KUMU by following the @TFCX account, where those sending virtual gifts like the TFCX Shawarma during the live could be among the lucky winners of special prizes.

Those who will not win during the monthly draws get a chance to be among the winners of the Php 750,000 total worth of cash prizes to be given away in the grand draw in December.

The game show is open to all Filipinos in the Middle East and Europe who are 18 years old and above, have a valid Philippine passport and visa, and not be an employee of ABS-CBN Middle East, the participating sponsors, any of its related partners, and other parties who are directly involved in organizing and promoting the promo, including their relatives up to the second degree.

For more details and to read the terms and conditions of the promo, you may visit the TFC Middle East or TFC Europe Facebook pages or mytfc.com/tfcwfh.