Miss Universe 2015 Pia Wurtzbach responded to bashers who claimed that she was undeserving of receiving a recent award given in Dubai. In a lengthy post on Instagram, she defended herself and explained all the things she did to deserve the award.

On Tuesday, December 8, Pia posted on Instagram a series of photos showing her participation in Dubai-based luxury travel magazine Xpedition gala ceremony wherein she was named ‘Woman of the Year.’

She expressed her gratitude for the award as she said that there were only 15 people who received it.

“Thank you so much @xpeditionmagazine @josh_yugen @yugenpr for the invitation and the award. 15 awards were given out tonight and I’m so grateful to receive one of them. Thank you for recognizing my efforts. ❤” she wrote in the captions.

She then stated that she noticed that there were netizens who bashing her saying that she didn’t deserve the award.

Pia decided to give her opinion even though she said that she is not the type to explain herself.

“Ang saya saya ko everytime I give back in my own little way. And it hurts me when people say na wala naman akong ginawa or ginagawa. Pinopost ko naman pero somehow people only notice the glam pics and my photos with Jeremy [her boyfriend],” she said.

She explained that she has been through many challenges this year but she was able to get through it with the help of the people who believe in her. That’s why she didn’t mind having bashers as long as some still believe in her.

“So to my bashers who work so hard to bring me down, okay lang sakin kung ayaw nyo sakin or iba kasi ang bet nyo. This month marks 5 years since I won Miss Universe but there are people are organizations who still believe and trust in me and thats all that matters. Ok na ok na ko dun. ❤😊.”

Pia then revealed some of the many charitable works and activities she did such as her partnership with Vestido and Aquafina to auction the gowns and shoes she wore in Miss Universe and World Wide Fund for Nature (WWF) Philippines. She also said that she auctioned her watches for a fundraiser by Anne Curtis and Angel Locsin, and does free talk with UNAIDS every 3 months.

She shared that she did a fundraiser dedicated to donating PPEs to hospitals on her own. People expected that she had a body of staff to organize the fundraiser event but she mentioned that she only worked with 3 people.

“When we collected everything, I only had my cousin, a friend and my driver to help me do the deliveries. Kami lang po yung gumagawa. Wala kaming big team or staff. Around the same time I also partnered with a local restaurant to continously deliver lunch and dinner to the ICU unit Makati Med for weeks and that was with my own money,” she said.

“Wala po akong maid sa bahay, kami lang po ng pinsan ko ang nandun and we did everything ourselves. I kept myself busy during this pandemic by helping, donating, keeping myself updated with the news and doing free interviews and talks.” 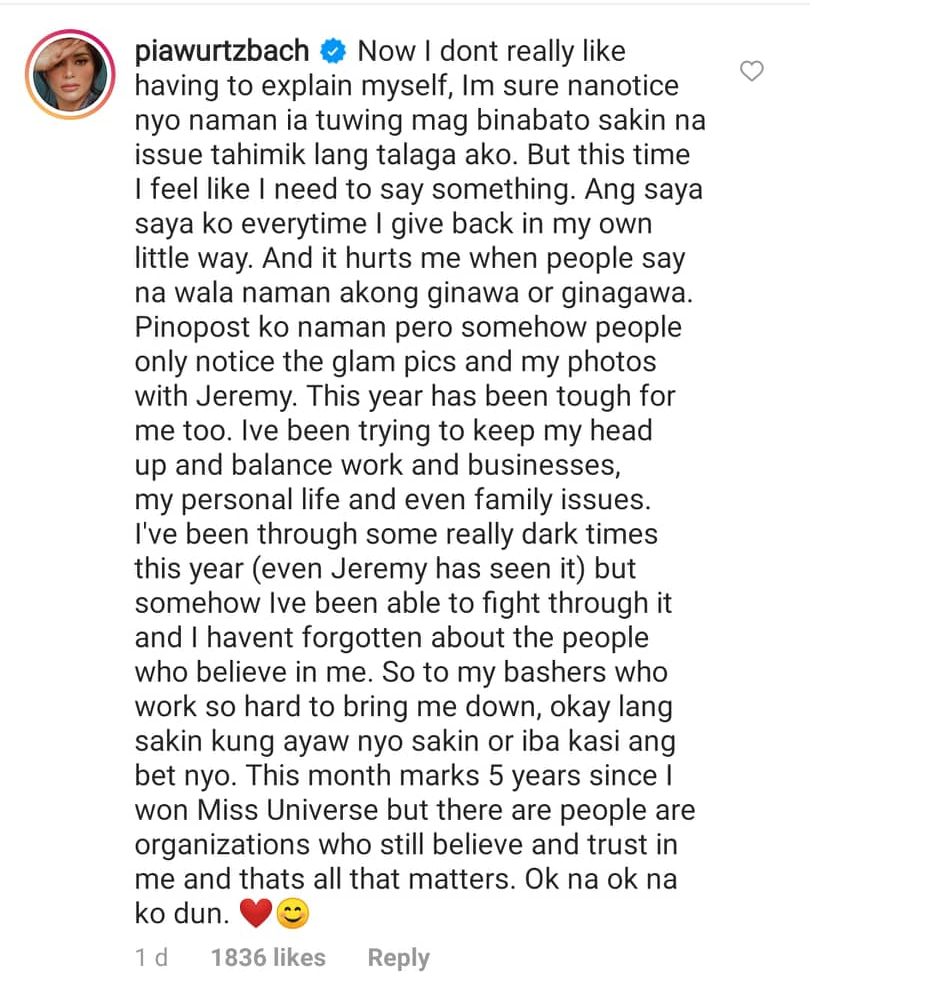 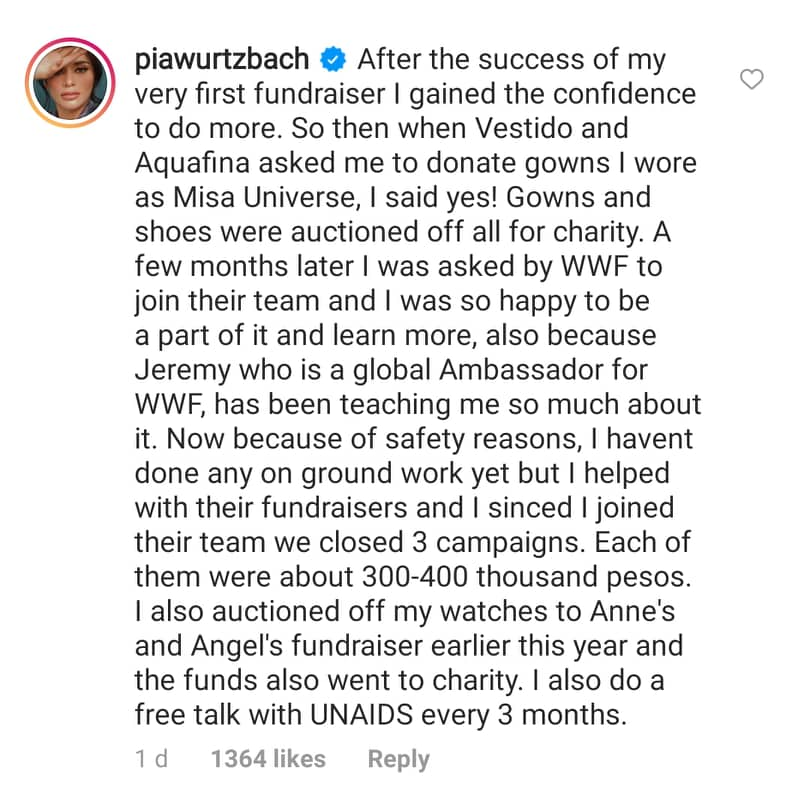 “People seem to think I have a staff of a big team but really most of the work I do, I do myself. I’ve always been that way,” she added. 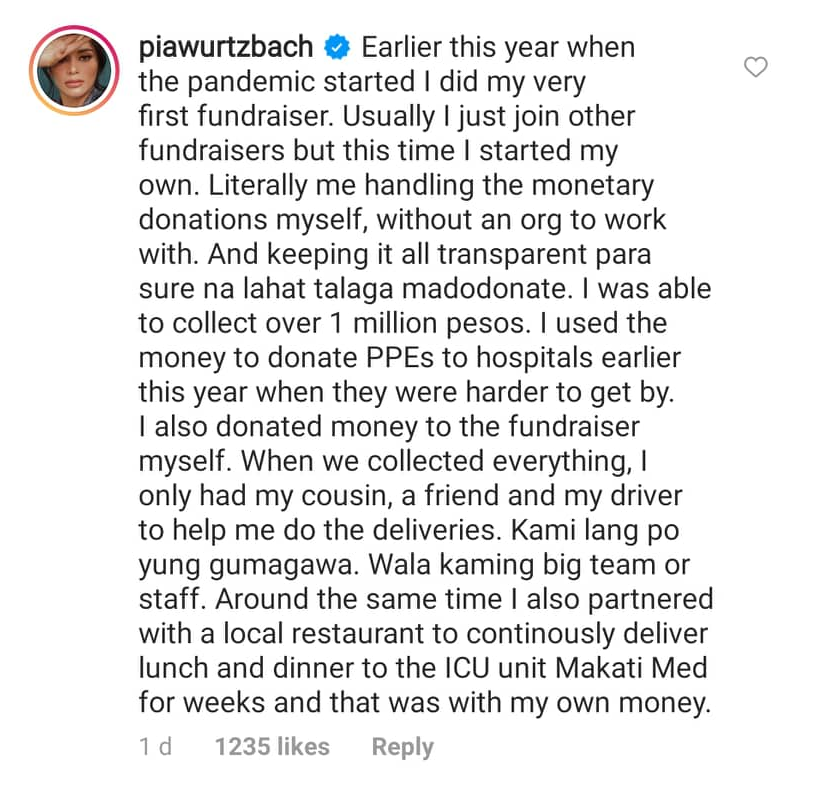 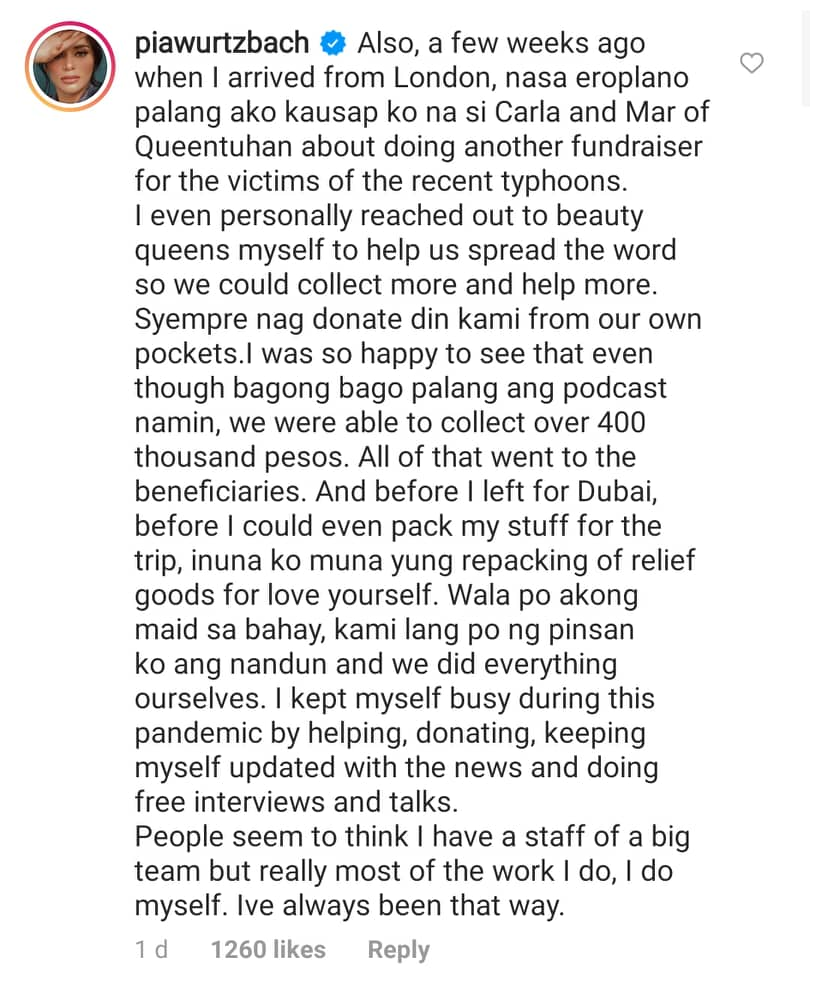