Filipina singer Nina Girado, simply known as Nina, gave the Netizens a treat as she held a three-hour-long free concert via facebook live on Monday, April 5. 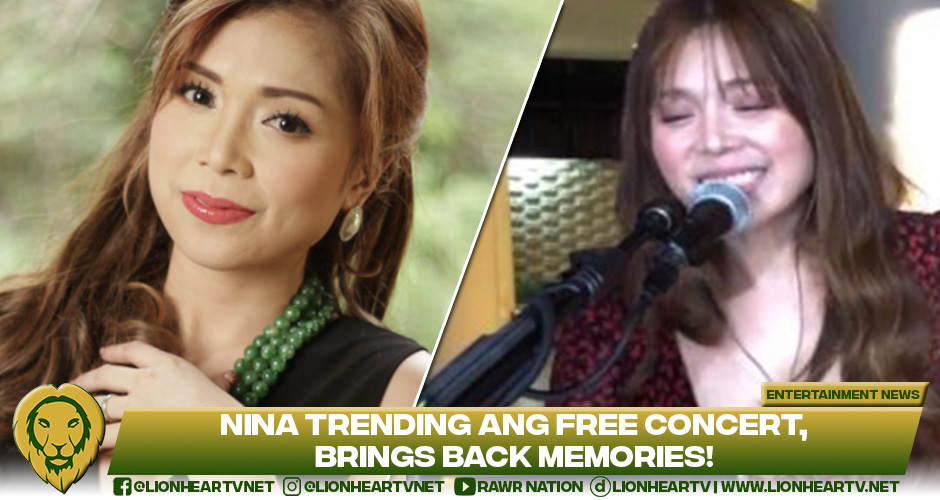 The Diamond Soul Siren sang her hit songs such as Love Moves in Mysterious Ways and I Love You Goodbye.

She also sang song requests from the Netizens which included hits like Jealous, Someday, Foolish Heart, and a cover of Olivia Rodrigo’s Driver’s License, among others.

Nina’s virtual concert then trended on twitter as Netizens used the hashtag #NinaLive to show their support for the singer.

One netizen noted that Nina’s virtual concert was what everyone needed especially during these times saying: “#NinaLive is the ayuda we never knew we needed.”

#NinaLive is the ayuda we never knew we needed.

Netizens made a trip down to memory lane as they mentioned that Nina’s concert allowed them to reminisce the past as they went sentimental.

suddenly felt the urge to scroll down all the way to the earliest photos stored in Google Photos, and went all senti while listening to #NinaLive 🥺 pic.twitter.com/dcgoWQKKRO

Dedicated to you know who: “Someday, someone’s gonna take your place.” #NinaLive https://t.co/xeOoEI11bV

GUUUUUUUUURRRRRRRLLLLLLLLLL. I remember the old high school me, trying to hit that note (oo, all about me).

Other Netizens complimented the singer and thanked her as well for serenading their night with her free concert. People commended Nina’s vocal capacity as she sang for about 3 hours straight.

You have to give props to Nina and the team for putting up a Monday night show despite the stress and the negativity.

Truly it brought us to memory lane. It gave us chills and good vibes, and also IT REVEALED OUR FREAKIN’ AGE. DAMN WE’RE OLD! HAHA! Good job! 👏🏻👏🏻✨✨ #NinaLive pic.twitter.com/seb50cPXCE

Thank you so much for your free concert, Nina!!! I love you. You’re a blessing. Thank you for making me feel better. This is exactly what I needed today. ♥️♥️♥️ Diamond Soul Siren Nina #NinaLive on Facebook Live pic.twitter.com/57ygIIkUP4

Imagine 3 hours of taking requests and singing. And majority jamming lang, which means walang practice, tenga tenga lang labanan. In fairness to Nina's vocal chords and to her band too. #NinaLive

Meanwhile, other Netizens brought the past issues of Nina into light as they mentioned the singer’s issue with her ex-boyfriends Nyoy Volante and Jimmy Bondoc.