The Maginhawa Community Pantry and other community pantries have been red-tagged, especially Patricia Non, the furniture designer who started it all.

The police force also got involved as the authorities have started checking the backgrounds of community pantry organizers. 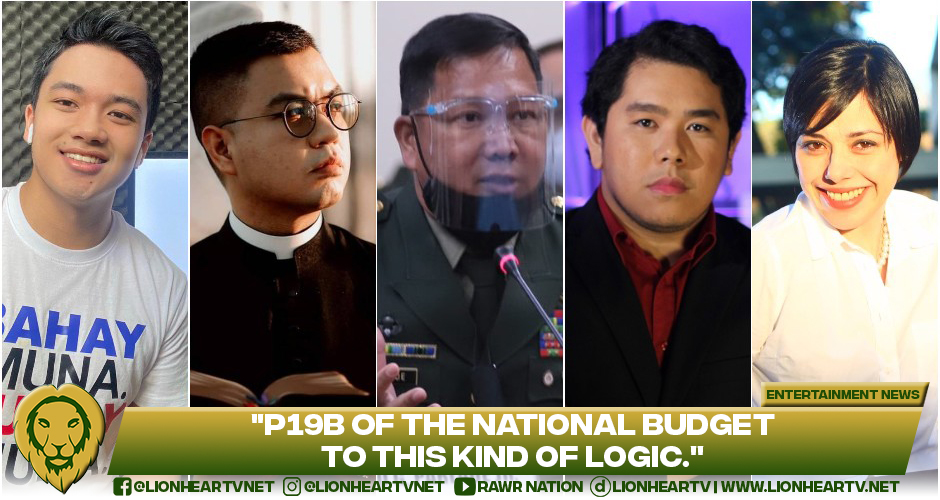 During a One News PH interview, Parlade explained that the police are investigating organizers because some of them have ‘controversial’ backgrounds.

But celebrities and Netizens got furious as the spokesperson compared Non to Satan.

Not just anger, some were also confused by how Parlade compared Non to Satan.

ABS-CBN News reporter Jeff Canoy was confused by the analogy used by the spokesperson.

With that being said, Pia Magalona scrutinized Parlade for using analogies incorrectly. She even urged the spokesperson to stop using it.

Stop it with the analogies already, Parlade, et al. You can’t even do that correctly. 🙄 https://t.co/QDOt0aWyrV

Journalist Barnaby Lo criticized Parlade for having such contrary statements.

The spokesperson commended Maginhawa Community Pantry, but he also continues to red-tag Patricia Non, without any evidence.

Meanwhile, former PTV-4 host Jules Guiang was infuriated by Parlade’s statement that he even called the general “demonyo.”

In another tweet, Guiang assumed that Parlade is paid to say stupid things on television. In the out-of-this-world analogy, Guiang felt that the general’s paycheck must be good to allow himself and his stupidity to be immortalized on the Internet.

He must have been paid so good to say stupid things like that on TV. I mean imagine your stupidity being immortalized on the internet. pic.twitter.com/Pe3GTNi2VB

Writer Jerry Grácio got irritated by how Parlade compared Non to Satan. With the recent controversial statement from general, Grácio asked to defund the agency to where Parlade belongs to.

A twitter personality was so furious that he even said that the one considered to be Satan right now is Parlade himself, not Non.

Due to his anger, photographer Niccolo Cosme even cursed Parlade for comparing Non to Satan. Cosme even called the spokesperson “bobo!”

Former health adviser Tony Leachon also has a say with how Parlade tried to link Non to the communist movement.

He criticized the general by saying that he cannot recognize the situation of the country, where food is part of the crisis. Furthermore, Leachon said, “A heartless man dishonors his children, his parents, and his God.”

If a man doesn’t recognize the implications of depriving the poor and the least in society of food in crisis , he should examine his heart and soul. A heartless man dishonors his children, his parents and his God. https://t.co/v9UsuJRnEh

The lead organizer of Maginhawa Community Pantry shared with ABS-CBN News how authorities asked for her personal information from her and volunteers of the community pantry.

According to Non, the questions became too personal. She stressed that the police should investigate the community pantry, not her.

Non stressed that she set up the food bank was to extend help.

When asked by the reporter if she filled out a form, Non denied doing so.

With how the authorities handled things, PhilStar journalist Jonathan de Santos was disgusted at the police for asking such questions.

A preacher could not even comprehend Parlade’s logic.

Fr. Fiel Pareja condemned how Parlade interpreted biblical events, which, according to Pareja, is dangerous. The priest also cannot understand the connection that the general is trying to establish.

On Tuesday, April 20, Parlade admitted that the counterinsurgency force, with a P19 billion budget for 2021, that they were profiling the community pantries that, according to Parlade, is being exploited by leftist groups.

“Because there are sectors trying to exploit this situation.

“Now, they’re riding on these beautiful programs of civil society groups of different sectors. This is it. Because while they’re in the community pantries, they’re also engaged in propaganda,” he said.

But during an interview with The Chiefs, a television program of One News, Parlade said that he is still trying to verify the information about Patricia Non’s linkage to any communist groups.

In the meantime, the Philippine National Police (PNP) chief Debold Sinas has ordered an investigation of all the policemen involved in the profiling of community pantry organizers.

According to spokesperson Brig. Gen. Ronnie Olay, the Criminal Investigation and Detection Group (CIDG) will attend to the complaints of the organizers. The Anti-Cybercrime Group (ACG) will handle social media posts against community pantries using PNP social media accounts, including those at the police station level.

“It was the act of getting information from the organizers of the police which our Chief PNP wants to be investigated. Their presence in areas near the community pantries is only to ensure peace and order,” said Olay.