Actress-singer Kim Molina slammed a Netizen who described her boyfriend-actor Jerald Napoles as ugly and looked like a garbage collector.

On Wednesday, May 12, Molina reposted an old poster of her boyfriend’s 2018 film Ang Pangarap Kong Holdap. The post showed a picture of Napoles who posed beside an action figure of his likeness.

Some Netizens wrote their appreciation for the said 2018 film and commended Napoles’s acting skills in portraying the part.

However, some Netizens left negative comments about the film saying that they didn’t find the film funny and even bashed Napoles’s looks.

One Netizen wrote that Napoles is ugly and looked like a garbage collector.

Molina did not let the comment pass. She responded by saying that there is nothing wrong with being a garbage collector. It’s a decent job, according to her. 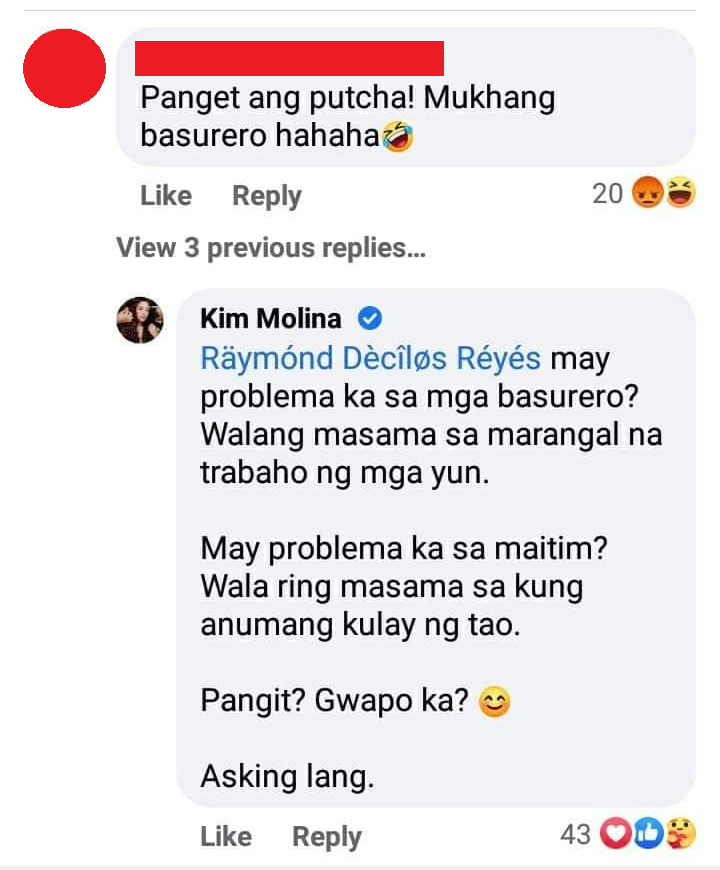 Kim Molina and Jerald Napoles are in a relationship for about seven years now. She previously posted a sweet photo with his long-time boyfriend as they celebrated their 6th anniversary in July 2020.

The couple is set to star in a blockbuster film Ang Babaeng Walang Pakiramdam.

The film is directed by Darryl Yap and will premiere on June 11 on ktx.ph, iWantTFC, TFC IPTV, SKY PPV, Cignal PPV for Php250 and on Vivamax, too.

This will be the first time that the couple will appear as onscreen partners. Meanwhile, this is the second film of Darryl Yap and Molina as both worked together for the movie Jowable, which became a blockbuster hit in 2019.