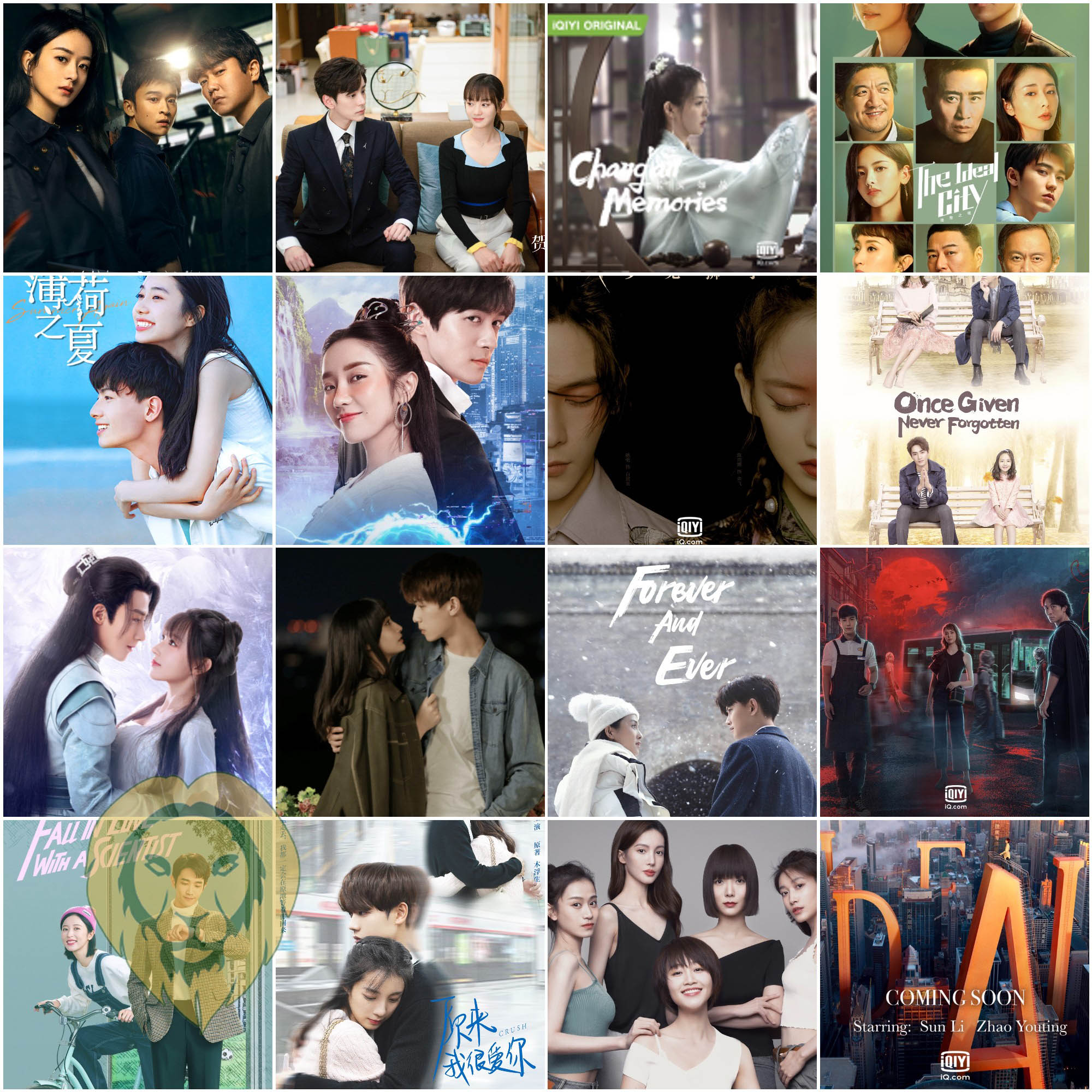 Legendary director Feng Xiaogang returns to TV series 25 years later and delivers Crossroad Bistro. After I Will Find You A Better Home, the highest-rating actress Sun Li portrays another career woman in The Ideal City, and explores the reality in architectural business in China with Mark Chao. Over 600,000 viewers have registered their interests in the series on iQiyi. Directed by Huang Tienjen (Someday or One Day), the romance and mystery series Lover or Stranger will feature Victoria Song in two characters. Song will work with Oho Ou again. In the historical series Chang’an Memories and Forever and Ever Ren Jialun and Bai Lu will have a romance across past and current lives. To play a mean teacher in Fall in Love With A Scientist against silly student Zhou Yutong, Jasper Liu memorizes a lot of knowledge about cardiac valves. Li Xian is praised for his military uniform look at A Love Never Lost, a new work expected to be one of his signature works since Go Go Squid!.

iQiyi’s “Sweet On” collection continue to indulge fans with more sweet romance by the global rollout of Forever and Ever, Make A Wish (starring Ren Youlun and Gia Ge), First Love Again (starring Patrick Shih and Amy Chen), Sweet Teeth (starring Wu Xuanyi and Bi Wenjun), Love Under The Full Moon (starring Ju Jingyi and Zheng Yecheng) after the successful launches of Moonlight and The Day of Becoming You. More iQiyi romance originals including My Heart, Crush (starring Evan Lin), Time is Love (starring Chen Youwei and Xu Yiyang), Out of the Dream (starring Yao Chi and Chen Yusi) are greatly anticipated. A large collection of premium romance dramas – Summer Again, Once Given Never Forgotten, A Camellia Romance, Unforgettable Love, Save My Love (working title) and I Am a Super Star – will guarantee a heart-throbbing love season.

Legendary director Feng Xiaogang returns to TV series 25 years later and delivers “Crossroad Bistro.” The director cooks up a finely woven story surrounding five women of different backgrounds and personalities who open up a restaurant together when life is not going anywhere. Their lives soon progress in different ways as they work together and operate the bistro.

Ren You Lun plays Chi Yan, a bookstore owner and is a celibate “Buddhist Youth” who happens to save a beautiful girl named Xiao Xiu disguised as a cat who came from a parallel world known as Meow Planet. In order to go back to her home planet, Xiao Xiu must grant Chi Yan a wish. This soon creates a problem and a ton of hilarious moments since Chi Yan does not wish for anything more.

The story features a transfer student Tong Xi (played by Ni Kexin) going back to her hometown due to her mother’s work where she again encounters her childhood crush Lin Nanyi (played by Chen Heyi) and her best friend Tao Zhu (played by Zhang Yinuo).

In this urban romance, meticulous child counselor Qin Yiyue (Hu Yixuan) and the rational yet cold CEO of He Group (Miles Wei) overcome initial misunderstandings as they get to know each other more and are thrust into situations that they need to resolve together.

Victoria Song plays two characters in the romantic mystery “Lover or Stranger” directed by Huang Tienjen. Song portrays a violinist Luo Qianyi (Victoria Song) loses her memory after an avalanche. Along with her businessman fiance Huo Youze (played by Oho Ou), they search for truth and redemption within the web of deceit they live in.

Vic Zhou, Christopher Lee and Berant Zhu, Sandrine Pinna, Wu Hsing-kuo and Tseng Jing-hua form the ensemble cast of this action-thriller that deals with how the law enforcement are forced to engage and work with criminals to solve multiple cases that ultimately leads to a larger and lethal crisis.

Ferryman: The Legends of Nanyang

The Soul Ferry franchise produces an overseas version, Ferryman: The Legends of Nanyang. Set at the backdrop of the unique mysterious ambience in Southeast Asia.

Who is The Murderer

A mind-blowing mystery that tries to unveil the truth where Zhao Liying plays a mysterious psychologist, and delivers an impressive performance. After being dormant for 16 years, stakeholders in an unresolved serial killer case all hold unspeakable secrets, and wait for the truth to emerge. It also stars Xiao Yang ang Dong Zijian.

Over 600,000 viewers have registered their interests in the series on iQiyi where highest-rating actress Sun Li portrays another career woman in “The Ideal City,” and explores the reality in architectural business in China with Mark Chao. Award-winning actor Yu Hewei and former Rocket Girls 101 member Yang Chaoyue will also star in the series.

Fall in Love with a Scientist

It’s a rare Chinese language series about scientists that pairs a PhD student named Bai Lingling (played by Zhou Yutong) with professor Yan Lanhang (Jasper Liu) whom she describes as “mean and pervert”, but affections still emerge in her mind.

Adapted from the novel by Mu Fu Sheng, “Crush” sees Sang Wuyan (played by Wan Peng) in her last year in college who encounters the visually-impaired Su Nianqin (played by Evan Lin), and has a crush on him at first sight. After they get to know each other more, Sang realizes Su is actually the songwriter that she always admires. However, the relationship is pressured and challenged by social reality.

Adapted from the namesake novel, this series stars Wu Xuanyi and Bi Wenjun about a library manager and a dentist’s fateful meeting that leads to a rollercoaster of emotions before finally realizing their true feelings.

Love Under The Full Moon

Xia Xia (Ju Jingyi) loses her memories due to the super moon, and is transported by accident to the future, in the smartphone of Dong Xia (Zheng Yecheng). Starting from misunderstandings, they grow affections over time. Can people from different times reach happiness?

Actor Chen Youwei plays a college student who has been oppressed due to family pressure. One day, he encounters an older girl Chen Feng (Xu Yiyang) who is frustrated in her dance career. As they create deeper bonds, they also gradually heal the traumas caused by previous relationships.

Out of the Dream

One of the highly-anticipated titles, actors Yao Chi plays a singer/performer/cosplayer who produces theater based on animation and Chen Yusi plays a traditional Peking opera performer. Can their love overcome cultural and artistic differences?

In this surreal romance, the relationship between dark technology genius Ye Tian (Tong Mengshi) and leading AR gamer Bai Wei (Xiao Yan) evolves from “archirival” to “love of their lifetime”.

I Am a Superstar

A radio host Zhang Ye (Wei Daxun) is kidnapped by aliens to a game world as a guinea pig. By accumulating reputation values in the game world, he overturns his life and becomes a superstar.

In the historical series Chang’an Memories The female protagonist with memories from her past life reunites with the male protagonist in modern times. Zhou Shengchen (played by Ren Jialun also known as Allen Ren) is a winning warrior on the battlefield, and has pledged loyalty to his country all his life. Cui Shiyi (played by Bai Lu) is the only daughter in the family that was assigned to marry the prince when she was born. Their love is doomed to face incredible challenges.

Ren Jialun and Bai Lu also star in this historical romance drama as Zhou Sheng Chen, son of Prince Nan Chen, is a hero who is loyal to the country and as Cui Shi Yi, daughter of an esteemed family, is the appointed Crown Princess since birth. Cui Shi Yi was sent to the Zhou Manor to learn some skills. There, Zhou Sheng Chen and Cui Shi Yi got to befriend one another. However, their relationship cannot progress due to their responsibilities. When the border is at stake again, Zhou Sheng Chen has to lead the army to war, while Cui Shi Yi has to marry the Crown Prince.

An epic story about five aspiring young people and their destinies intersect at a time when their country is on the verge of survival. It’s starred by Li Xian (widely known for his recent work in “Go Go Squid”), Jessie Li, Wei Daxun, and Zhou You, with Zhu Yawen as a special appearance.

In this historical romance, the largest tea merchant would like to marry the only daughter of a fabrics store Xu Chunchun (Li Mo) to his only son Zhou Junjue (Guo Zifan). In order to run away from her stepmom and start her own business, Xu agrees to the marriage. Annoyed by all the rules in a rich family after marriage, Xu wants to get divorced as soon as possible, but Zhou is not planning to let her go, after love at first sight.

Once Given Never Forgotten (iQiyi Exclusive)

A romance story with a ten-year age gap between a 10-year old sick girl and a bereaved young man whose girlfriend died and donated her cornea to the 10-year old girl. The two eventually get to know each other better while trying to suppress growing affections for each other.