In an interview with ABS-CBN News, seasoned host Boy Abunda shared his insights as a Communication Arts instructor regarding Toni Gonzaga’s controversial interview with Bongbong Marcos. 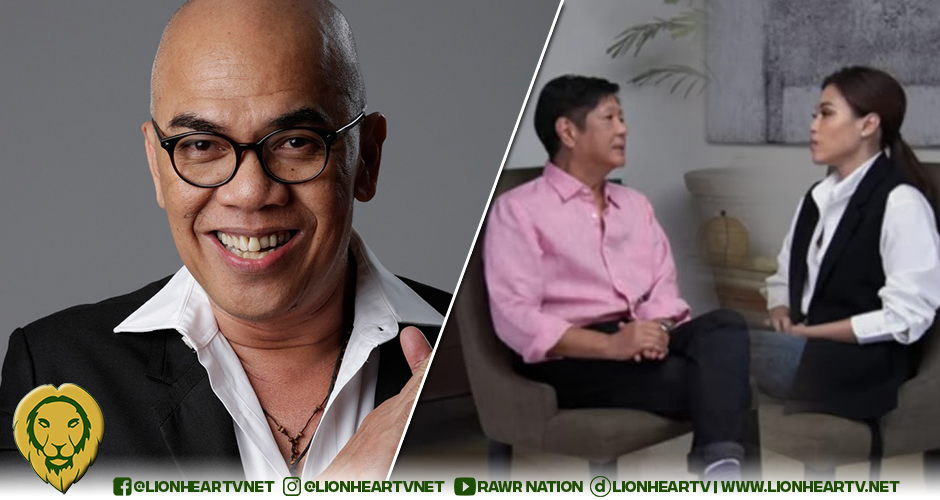 Abunda analyzed the interview from an academic perspective.

He pointed out that there are types of interviews like contrarian or hostile, investigative, educational, entertaining, and promotional.

Regarding Gonzaga’s interview with Bongbong, he perceived it as “friendly, almost familial.”

He also thought that it may have been a PR interview at some point. But, whatever kind it is, Abunda said that it does not matter anymore because it is done.

Abunda then recognized the fact that the interview has been “polarizing.”

The audience has different perspectives about the Marcoses that is why it became controversial.

He then addressed the valid points of people who asked why were the injustices during the Martial law not discussed during the interview.

“Tignan natin yung kabuuan, why was it not discussed in the interview? Because that interview was a friendly interview.

‘That interview was not an investigative interview or contrarian interview.

“Do we blame everybody who did an interview with Bongbong Marcos because it did not please whatever we felt has to be discussed?”

Abunda believes that Gonzaga does not deserve all the hate she is receiving now because of her interview with Marcos.

“It is not fair to blame her as an interviewer en toto for all the sins that are being attributed to the Marcoses whether you like her, you respect her, that’s a bit of a stretch.”

As of writing, the said interview of Gonzaga with Marcos already has more than 9 million views on YouTube.