On October 22, the Oxford Philippines Society released a statement reiterating that Senator Marcos didn’t have a ‘degree’ in Bachelor of Arts in Philosophy, Politics, and Economics at Oxford University, but a ‘special diploma’ in Social Studies. 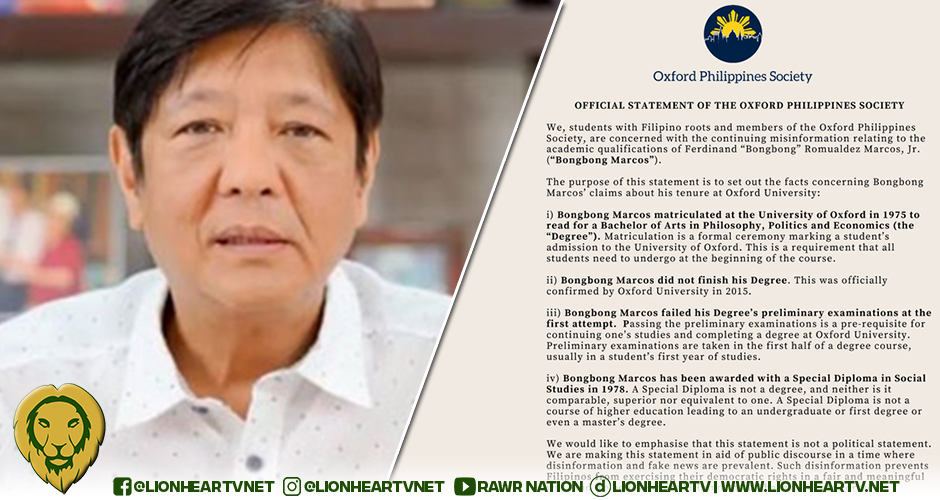 As a result, netizens started reacting to the news shared on social media.

Oxford Philippines Society, composed of Filipino students and alumni of Oxford University in England, sets the record straight about Ferdinand "Bongbong" Marcos, Jr.: He did not finish his degree and failed the preliminary examinations. But he has a special diploma. pic.twitter.com/azI4Nu38ZS

The business editor of the Philippine Daily Inquirer, Tina Dumlao Arceo, reiterated the statement of the Oxford Philippines Society.

Again, Bongbong Marcos did not finish his degree at Oxford University. What he has is a Special Diploma, which is not a degree. pic.twitter.com/Xm2HupaTal

Other netizens criticized the Senator’s camp for claiming that he graduated with a degree in Philosophy, Politics, and Economics.

Why is it difficult for @bongbongmarcos to admit that he did not obtain a bachelor degree from Oxford University? Anyway, a degree is not one of the qualifications for any elected positions in the Philippines. https://t.co/QRzzEP9Iq9

Other netizens defended Marcos by presenting documents claiming that the Senator studied at Oxford University from 1975-1978.

They also attempted to disprove the Oxford Philippines Society in the process.

Eto pa…and sa oxford 3 years lang ang term to get a degree. Bbm finished trinity term. The 3rd and final term. Thats why, he was qualified to enroll in Wharton for an MBA pic.twitter.com/0veGntCUcr

One netizen answered the claims of BBM supporters, noting that they weren’t criticizing his qualifications to hold a position.

They were criticizing his camp’s attempts of disinformation by publishing on the Senator’s resume that he had a degree in BA in Philosophy, Politics, and Economics from Oxford University.

Another netizen pointed out that the Oxford University itself hosted the Oxford Philippines Society’s page.

It's an organization of Filipinos studying in Oxford. I'm not sure what you mean by this image. Are you saying they're a fake org? But they're website is hosted by Oxford University itself.https://t.co/zfUp88dC0D

Earlier, Marcos’s spokesperson Vic Rodriguez claimed that the Senator has always been forthright about his ‘special diploma’ in social studies from Oxford.

However, according to reports from 2015 to 2016, Senator Marcos claimed that he held a Bachelor’s Degree in Philosophy, Politics, and Economics through his Senatorial profile and one of his interviews.

Earlier, Senator Marcos claimed to be friends with The Beatles.

However, a Tiktok Video surfaced showing an interview with George Harrison, The Beatles lead Guitarist, recounting their band’s experience in 1986 during his father’s regime.