Vice Ganda will wrap up the first season of “Everybody, Sing” with 100 Taal survivors singing for the P2 million jackpot prize this weekend (October 9 and 10) on Kapamilya Channel and A2Z. 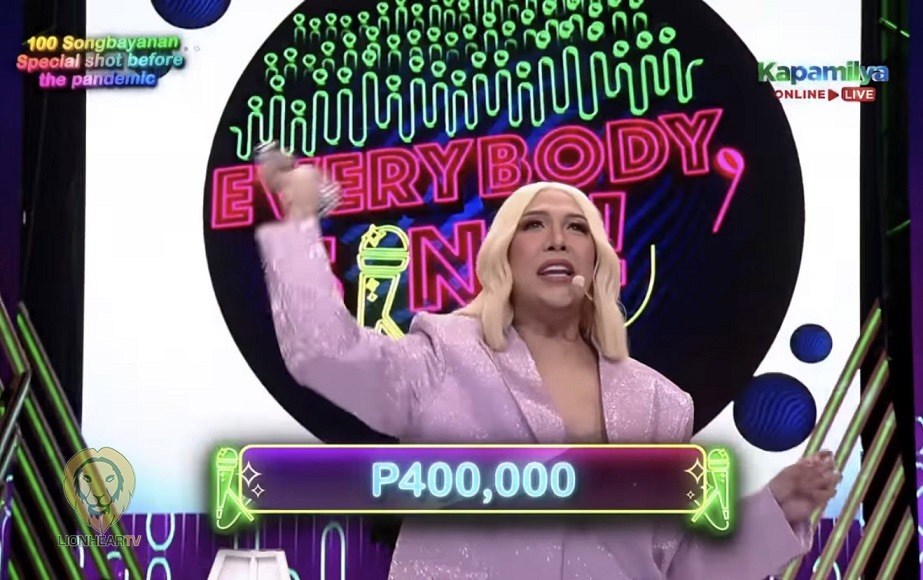 The community singing game show, which debuted last June 5, will air the last two episodes of its “100 Songbayanan Special,” which were all taped before the pandemic.

Just like in other episodes of “Everybody, Sing,” viewers will get to sing along and get to know more about the featured songbayanan, who are Filipinos who survived the Taal Volcano eruption in 2020. They can also expect more of Vice’s wisecracks and words of wisdom as she converses with the players.

Vice and the program have won the hearts of Filipinos for showcasing the value of bayanihan and for giving different groups of people a platform to share their stories and a chance to win prizes that can help their families.

Recently, Vice and “Everybody, Sing” attained recognition after being named as national winners for Best Entertainment Program Host and Best Music/Dance Program, respectively, at the Asian Academy Creative Awards 2021. The show was also nominated in the Light Entertainment category at the 2021 Venice TV Award.

Meanwhile, in last Sunday’s (October 3) episode with the 100 palengke vendors, the Unkabogable Phenomenal Box-Office Star shared touching moments with two selfless mothers, whose love for their children have enabled them to overcome hardships and pain.

Vice also encouraged another vendor, Chuchay, to continue praying to God for strength as she works for her children’s future by herself.

The palengke vendors managed to get four correct song titles in the jackpot round to win P400,000. Find out if the 100 Taal survivors will do better and take home the elusive P2 million jackpot prize on Saturday (October 9) and Sunday (October 10) at 7 pm on the season finale of “Everybody, Sing” on Kapamilya Channel, Kapamilya Online Live, A2Z, iWantTFC, and TFC.