Hellbound, the epitome of dystopia envisioned by Director Yeon Sang-ho, is a global phenomenon. Hellbound is a Netflix Series on supernatural events caused by otherworldly beings who appear out of nowhere to issue a decree and condemn individuals to hell, causing mayhem and enabling the religious group The New Truth to grow in power and clash with those trying to uncover the truth. 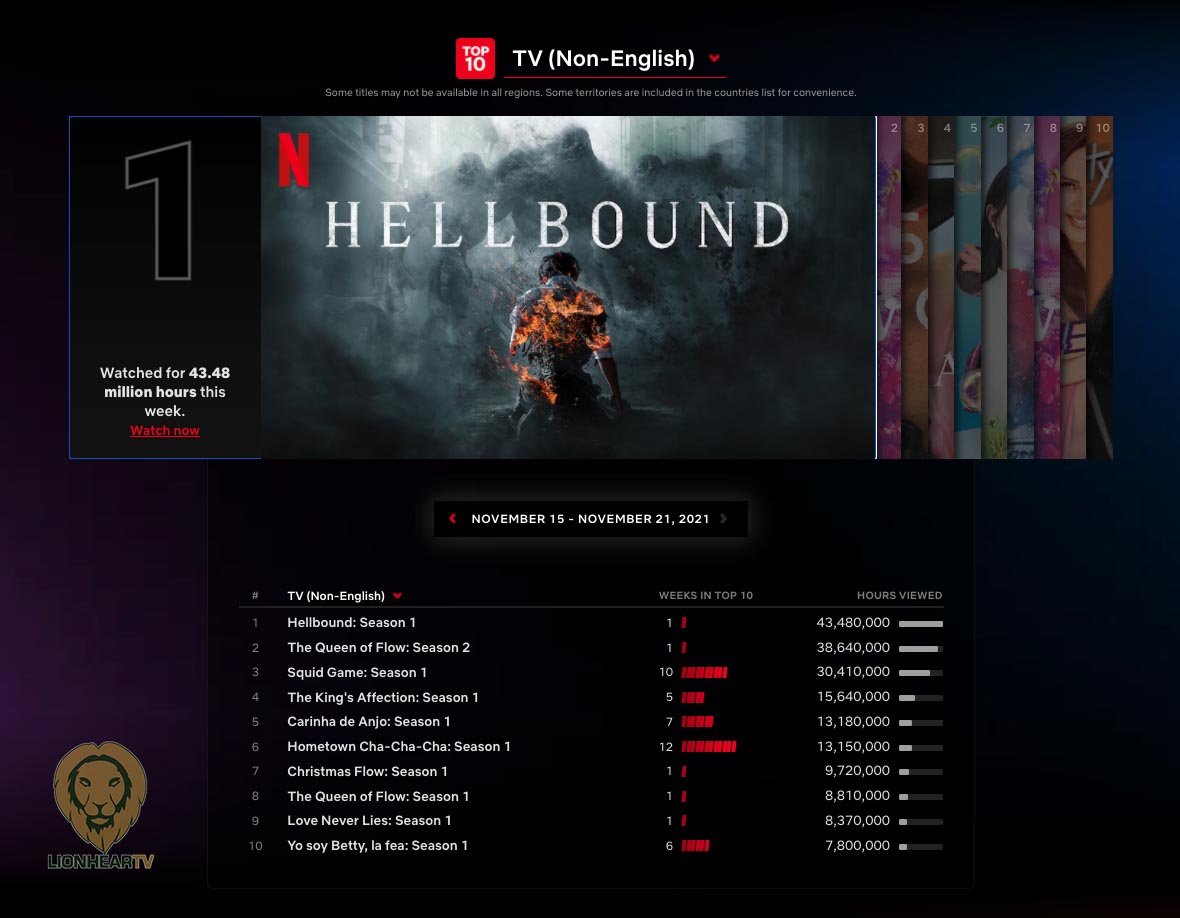 According to Netflix’s “Global TOP 10” Website (top 10.netflix.com), Hellbound recorded an accumulated 43.48 million hours watched 3 days since its release, and ranked number 1 in the top 10 list in 12 countries, including not only South Korea but also Singapore, Hong Kong, Philippines, Indonesia, Thailand, crowning it as Netflix’s Global Top 10 TV (Non-English) as of the 24th (Wednesday). Also landed in the Top 10 List in 59 countries including India, US, France and Germany. This result is more outstanding considering Hellbound’s record only includes 3 days’ sum of the viewing hours out of the week (November 15th to 21st) since its release was on Nov 19th.

Hellbound’s superb reception was anticipated even before its release. Global interest in K-Content is at its peak following Squid Game, and Director Yeon Sang-ho has already awed global audiences before with Train to Busan. What added to the hype was Hellbound’s partial release in prestigious global film festivals, such as Toronto International Film Festival, BFI London Film Festival and Busan International Film Festival, where the series was acclaimed for its quality. As expected, Hellbound won the hearts of global viewers. In addition to co-writing the original webtoon series, Director Yeon Sang-ho took charge of co-writing the script and directing to expand his own unique universe. With the shocking and refreshing premise of sentencing people to hell, Director Yeon awes and stimulates the audience, forcing them to ask questions on universal topics like life and death, crime and punishment, and justice. On top of that is the stellar cast lineup of seasoned actors – Yoo Ah-in, Kim Hyun-joo, Park Jung-min, Won Jin-ah, Yang Ik-june – that lures the audience to Hellbound.

Netflix launched its “TOP 10” website (top10.netflix.com) on the 17th, which unveils lists of the most popular series and films on Netflix on a weekly basis. The weekly lists are based on the total number of view hours, updated every week on Tuesday (PST / 4AM every Wednesday Philippine Time) with data from Monday through Sunday. The list is separated into English and non-English, and Film and TV.