We’re running down the numbers on how Lazada celebrated its Biggest One-Day Sale of the Year!

Lazada, one of the country’s leading eCommerce platforms, took this year’s 11.11 to new heights, pulling off record-setting numbers — from over a billion minutes spent on the app by shoppers region-wide to more than P126 million worth of Lazada Bonus discounts collected — Lazada’s flagship 11.11 Biggest One-Day Sale continued to be among the most highly-anticipated shopping events that draw millions of shoppers together every year. 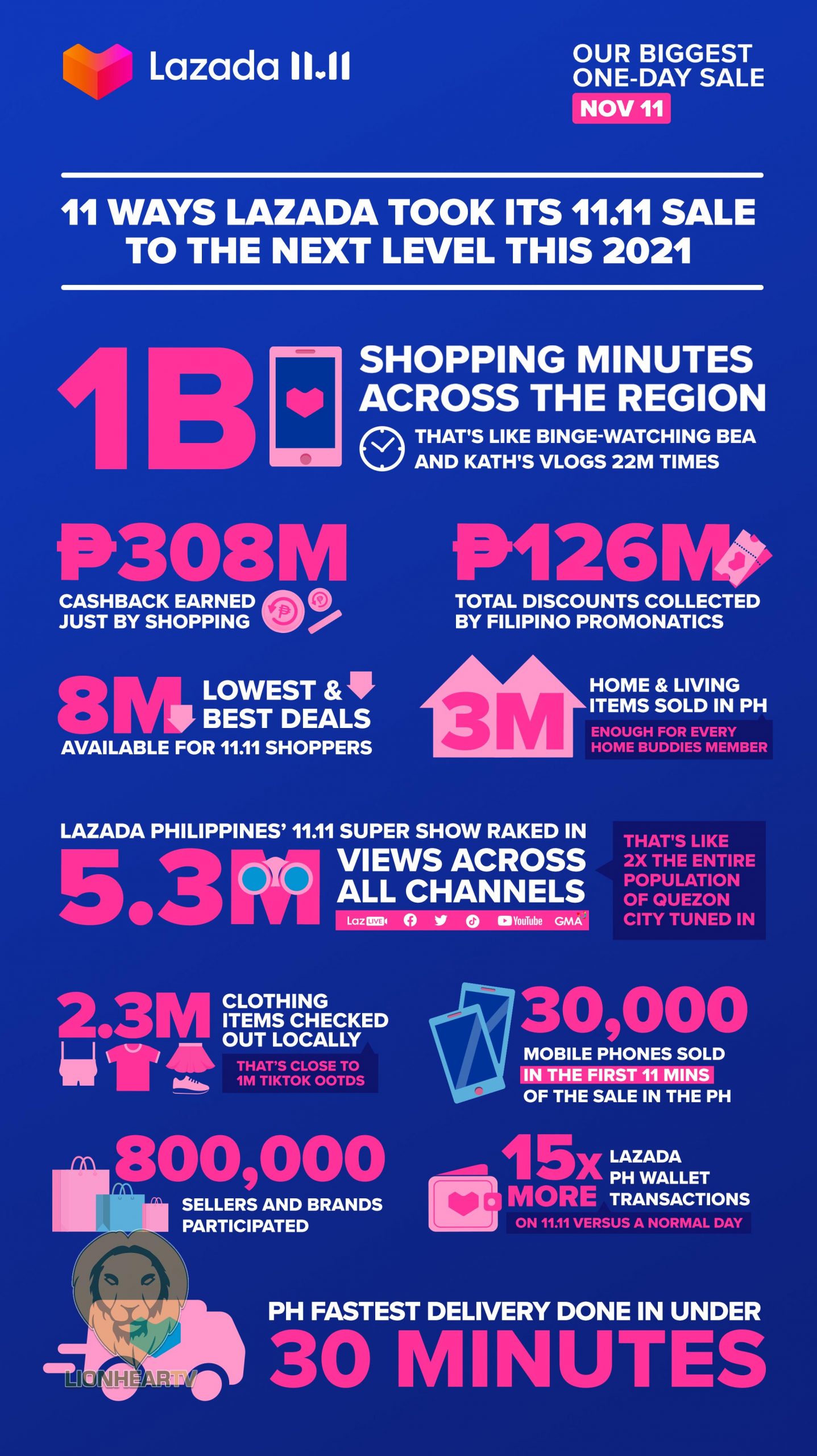 Curious to know more about how we all shopped this 11.11? Here are 11 facts from this year’s Biggest One-Day Sale:

1. This year’s 11.11 shoppers enjoyed over 8 million of their lowest and best deals.

2. With the endless promos and deals available, it’s no wonder that a total of 1 billion minutes was spent by consumers on the app across the region. That’s like binge-watching Lazada Brand Ambassadors Bea and Kath’s vlogs 22 million times!

3. A record-breaking 800,000 sellers and brands across the region participated in this year’s Biggest One-Day Sale of the Year, of which 200,000 where MSME sellers in the Philippines. Can you imagine going through 8,000 malls with 100 stores in it, within 24 hours?

4. Lazada Philippines’s 11.11 Super Show raked in a total of 5.3 million views across all channels — that’s like twice the entire population of Quezon City tuning in during the show! With performances from K-pop superstars SEVENTEEN, Lazada’s regional Happiness Ambassadors, together with local Brand Ambassadors Bea Alonzo, Alden Richards, Maine Mendoza, SB19, and other beloved Kapuso personalities, it’s no wonder!

5. Love promos and discounts? Filipino shoppers collected a staggering P126 million worth of total discounts from Lazada Bonus on the app! If that doesn’t say a promonatic nation, we don’t know what does.

7. Lazada Wallet transactions were up 15 times more on 11.11 compared to a normal day.

8. Over 3 million home and living items were sold. Enough for every member of the Home Buddies Facebook Community.

11. Need your 11.11 finds, stat? The fastest delivery of a 11.11 purchase was done in under 30 minutes, with romance books and desktop computers. Frozen meat products are a close runner-up with under an hour.

Highlighting that digital acceleration was still on the rise in the country,Lazada Philippines CEO Ray Alimurung said, “We’re delighted that our flagship 11.11 shopping festival continues to deliver a best-in-class Shoppertainment experience for shoppers, who see Lazada as their one-stop destination to be entertained while having access to top deals, rewards, and great content. As more Filipinos embrace a digital economy, we are heartened to see more of our partner brands and sellers leveraging Lazada’s 11.11 as an avenue to effectively reach more new consumers in the country, and increase engagement to drive sales for their business.”