Attention is on an unprecedented level for the 2022 national poll Presidentiables, as reflected by the record-breaking numbers their interviews have set online. 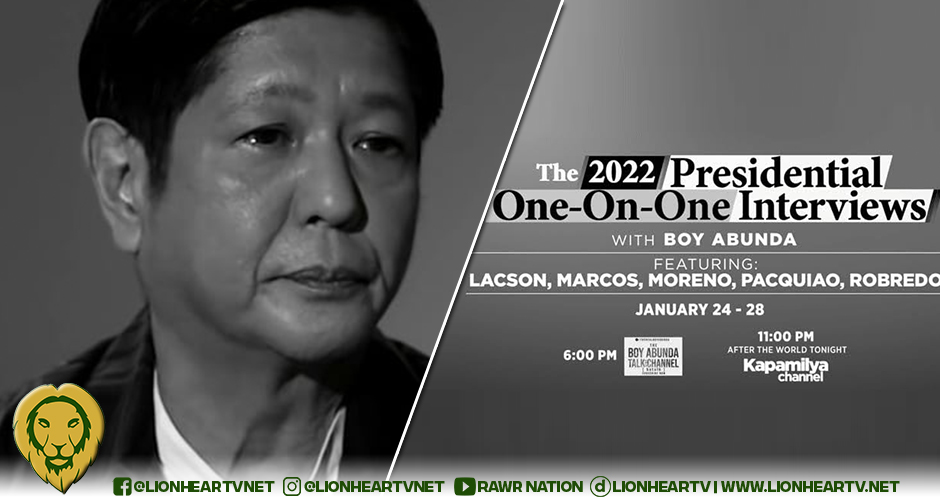 The second in a series of interviews that also included presidential aspirants Senator Ping Lacson, Vice President Leni Robredo, Manila Mayor Isko Moreno, Senator Manny Pacquiao, The Presidential One-On-One Interview on the late dictator Ferdinand Marcos’ son, has been undoubtedly one of the most anticipated, and it showed by the attention it received online.

The interview was streamed on Boy Abunda’s YouTube channel, The Boy Abunda Talk Channel, a day after the presidential aspirant Lacson took the hot seat.

Following his absence on the much-talked-about and raved-about Jessica Soho-hosted interview, anticipation for Marcos appearing on succeeding presidential interviews was on a different level.

On Tuesday, Marcos appeared on two highly-anticipated interviews, one on DZRH and another on ABS-CBN. For the latter, the interview was streamed live via Boy Abunda’s channel and aired on a delayed telecast via Kapamilya Channel.

JUST IN: Concurrent viewers of #BoyAbundaInterviews has surged past 300k on YouTube. pic.twitter.com/dqch3ttg1U

The interview with Marcos first broke the record set by Jessica Soho within its first 30 minutes of airing, surging past 240,000 in concurrent live viewers.

Towards the end, the numbers steadily climbed and went past 300,000—a never-before-seen figure on the platform—before peaking at 306,000. Subsequently, this milestone also erases FPJ’s Ang Probinsyano’s record on the platform. The six-year-old program currently holds the record set by a regular and continuously-airing program on YouTube.

In comparison with his predecessor on the hot seat, Marcos has pretty much raised the to-beat numbers in terms of live viewers; Lacson’s interview reached more than 50,000 live viewers. Next in the series is Vice President Leni Robredo, another frontrunner whose interview is also highly-anticipated on the platform.