ABS-CBN continues to improve in share price at the stock market. It suggested growing confidence from investors who are currently having in the company’s recuperating financial health. 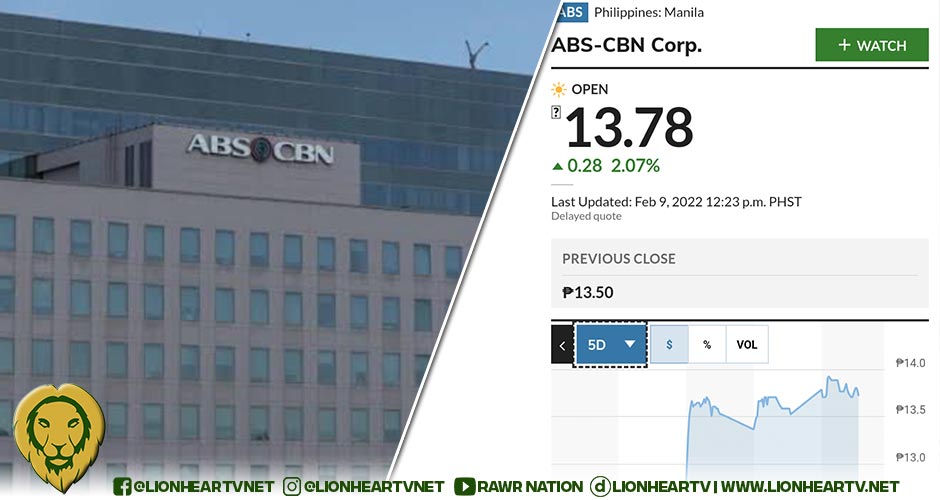 On a steady rise since January 31, ABS-CBN Corp’s stock price continues to project a bullish outlook.

It is now on the verge of setting a three-month high, which means market confidence in the company remains strong amid its still persistent fiscal struggle. The company is yet to release a quarterly financial report for the 4th quarter of 2021, and while it is expected to remain in the red zone, the promise of profitability seems already around the corner.

With the beginning of the campaign season, political ads are expected to drive the company’s coffers forward.

At the stock market, both ABS-CBN Holdings and ABS-CBN Corp’s stock prices have shown positive growth, at least in the past week. For the latter, the share price has improved by more than 20%, in the last seven trading days.

Yesterday, February 10, ABS-CBN pulled off a 0.73% improvement over a day earlier, as it closed with a PhP13.80 stock price apiece.

It is important to note these improvements in stock prices as they reflect how much confidence the company is getting from investors. A rise strongly indicates that investors believe the company will become profitable in the future.

The trajectory of these share prices also provides insights to properly gauge the company’s financial health. Of course, there are also other important factors to consider, but stock prices somewhat provide a clear picture of the company’s overall health.

ABS-CBN continues to expand its horizon after losing its broadcast franchise last in 2020. This year, alone, the media giant forged alliances with some of the biggest streaming platforms in the country. In January, ABS-CBN Entertainment inked a partnership with Asian streaming mammoth, Viu, to distribute advanced episodes of The Broken Marriage Vow, and other upcoming programs.

This month, it announced its partnership with YouTube in developing the YouTube-only series, How to Move On in 30 days.