Like actors and other creative talents, shows for franchises also hop from one TV network to the other. 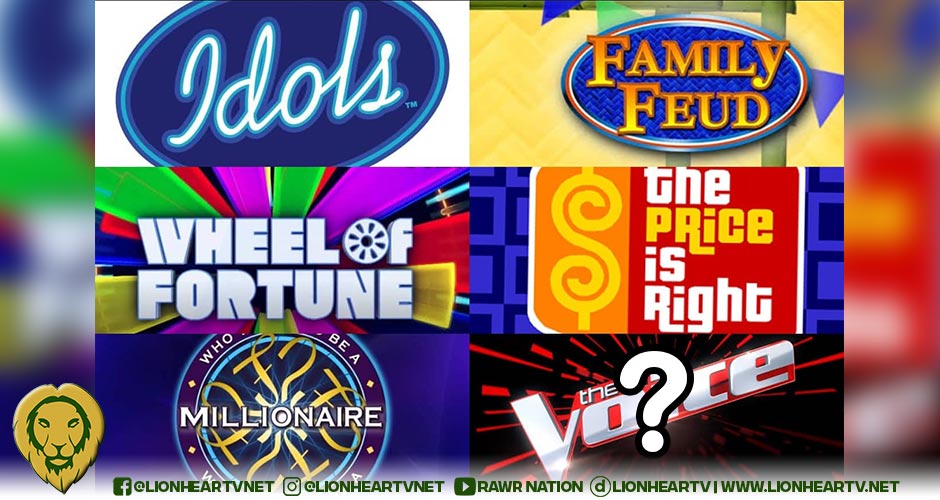 Every time a new game show or talent show format does make waves overseas, local TV stations start racing against each other to acquire the rights to produce it for Filipino audiences. Some global game shows and reality-talent shows that unsurprisingly found great success in the country, but some also failed to duplicate their predecessor’s successes.

When it happens, other producers prepare themselves to get their shot at reviving the franchise, although that’s mostly not the case. TV networks take the failure of the first incarnation as a cue to skip it and consider the next big show. That said, there are still incarnations of international formats on Philippine TV, regardless of the failure of their past editions.

Family Feud. Developed by American TV producer Mark Goodson, Family Feud–is a fun quiz shown where the players compete with other families. Those who guess the top answers to survey questions will win the game.

In the Philippines, the game show had three versions and four incarnations on three TV networks. The first version of the show was produced and aired by TV5 (then ABC 5), from 2001 to 2002, with Ogie Alcasid as its game master. In 2008, GMA Network revived the local franchise, with Richard Gomez, Dingdong Dantes, and Edu Manzano–taking turns as the show’s presenter. ABS-CBN brought the show’s local rights and aired its version in 2016, with Luis Manzano as its game master.

This year, the local rights of the show returned to GMA Network. The fourth Philippine incarnation of the international game show has been airing on the network’s pre-primetime slot since March 2022.

Idol. While this massively successful made unprecedented success in the United States and other countries, it did not produce quite a similar accomplishment on local television — at least, not yet.

TV5 (then ABC 5), produced the first edition of the reality talent show in 2006. Philippine Idol was presented by TV host and actor Ryan Agoncillo, while Ryan Cayabyab, Pilita Corales, and the late Francis Magalona served as judging panel. TV5, however, did not renew the series for a second season, due to losses incurred in producing the first season. In 2008, GMA Network brought the local franchise of the show. This time, it was called Pinoy Idol. Like Philippine Idol, the Kapuso version was also unable to impress.

The Price is Right. The widely-popular American game show had two incarnations in the Philippines and aired on two TV networks. ABC 5 (now TV5) aired the first version of the hit show in 2001, with Dawn Zulueta as its presenter. The gameplay requires players to guess the price of a mysterious item; the one with the correct or closest guess gets the chance to advance in the game.

The second incarnation was aired by ABS-CBN February 14 to August 13, 2011, with Kris Aquino taking on the hosting duties. The Kapamilya version had more than a dozen pricing games, while the ABC version had two.

In the Philippines, the puzzle-solving game show had two incarnations: one on TV5 (formerly ABC 5), and another on ABS-CBN. ABC 5 aired its version from November 19, 2001, to May 31, 2022, with Rustom Padilla (now BB Gandanghari), as the presenter, while Victoria London served as the puzzle presenter.

ABS-CBN brought the local rights of the show in 2008 and aired it from January 14 to June 25, 2008. It got presented by Multimedia Queen Kris Aquino. Zara Aldana and Jasmine Fitzgerald, meanwhile, served as puzzle assistants. Unlike the TV5 version, which bade farewell unceremoniously, the Kris Aquino-hosted version had an official season-ender.

Who Wants to Be A Millionaire? One of the most popular television game shows in the world, Who Wants to be A Millionaire? had two versions on Philippine TV. Viva Television produced the first local version of the show in 2000 for IBC-13, with award-winning actor, Christopher de Leon, as quiz master.

One of the most popular television game shows in the world, Who Wants to be A Millionaire had  two versions on Philippine TV. Viva Television produced the first local version of the show in 2000 for IBC-13, with award-winning actor, Christopher de Leon, as quiz master.

In 2009, TV5 produced its version, with Vic Sotto as the new game master. The edition went to become successful and stayed on the air until 2015.

The Voice Philippines. While there is no official confirmation yet, rumors of GMA Network already bought the local rights of the globally-successful talent-reality search. ABS-CBN brought the show to local television in 2013.

However, it remains to be seen, which of the three editions (Adults, Teens, Kids) got bought by the Kapuso Network. Some reports suggested that at least two of its editions still belong to ABS-CBN.

What are your fondest memories about these TV shows? Don’t forget to share your thoughts and recollection in the comment section.