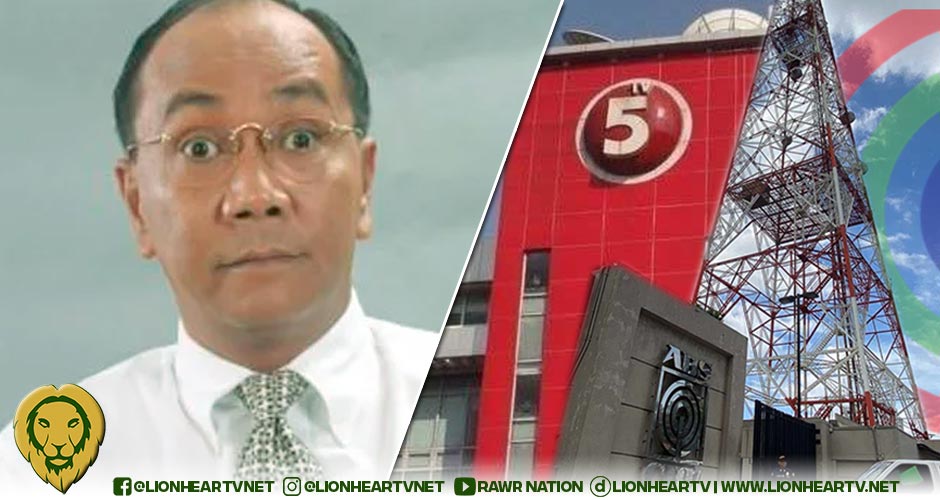 In his recent Facebook post on Thursday, August 11, Sonza who has been at the forefront of social media bashing against the Kapamilya network has called the attention of Congress, following the historic joint venture deal between ABS-CBN and TV5.

ABS-CBN and MediaQuest (which operates TV5), inked officially on Thursday, August 11, their joint-venture agreement which will allow much broader partnership and collaboration between the two networks.

In his post, Sonza accused ABS-CBN and TV5 of fooling Congress and the NTC over its partnership deal. He said the deal was done to circumvent the law since ABS-CBN wasn’t given a new broadcast franchise when it applied for renewal.

Congress of the Philippines.

“Puwede na palang paikutan ang Kongreso by going into ay simple arrangement/deal of 65%-35% by and between TV5 (Media Quest) at defunct ABS-CBN Broadcasting.

Sonza also continues to assert that ABS-CBN has violated the provision on its franchise which caused the House of Representatives to reject its franchise renewal.

However, during more than one week of the hearing, several government agencies all attested that ABS-CBN did not violate any provisions of its franchise.

The BIR during the hearing said that ABS-CBN has been regularly paying its taxes and has no tax delinquency.

“ABS-CBN Corporation ay (is) regularly paying taxes for the past years. Na-check naman po na ‘yung dapat nilang i-withhold at na-remit naman nila sa gobyerno (The amount that it needed to withhold had been checked and it was remitted to the government),” said BIR Asst. Comm. Manuel Mapoy.

On the issue of Gabby Lopez’s citizenship, the DOJ through Usec. Aglipay-Villar said that Lopez is a Filipino citizen holding dual citizenship, thus not barred from holding executive positions in a media company that their family owns.

The Securities and Exchange Commission was also invited to testify on the questioned PDRs of ABS-CBN which allegedly violated their franchise.

The SEC however said that they aren’t aware of any violation which warranted an investigation from the commission.

“At this time, we are not aware of any violation or any ongoing complaint or investigation involving ABS-CBN. ABS-CBN is a listed company that is subject to the reportorial requirement,” said SEC, Commissioner Ephyro Luis Amatong.

Other agencies like the Labor Department, and PEZA also testified that ABS-CBN did not violate any provision of its franchise.